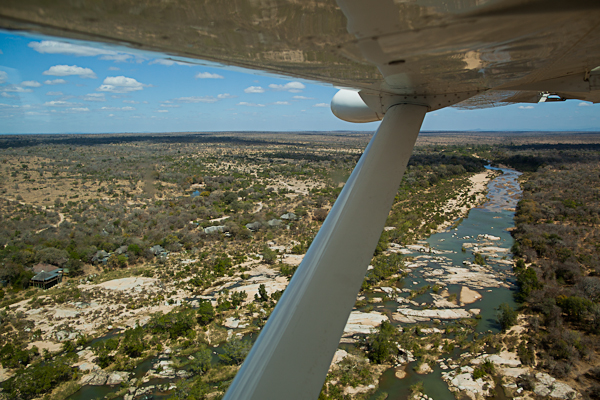 I nodded with some hesitation in response to the pilot’s question just before taking off in the cramped, six-seater Cessna 206.

Surprisingly, the ultra manual-looking controls didn’t completely wig me out. Nor the fact we only had one pilot who looked about 14 steering our plane. At least he looked healthy, I reasoned. 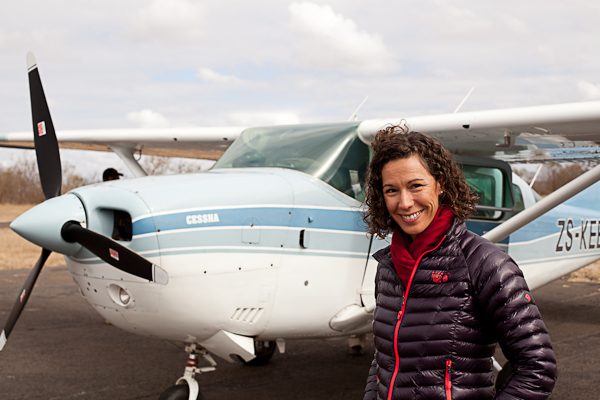 The Cessna 206 became our trusty, flying steed for several legs of our safari adventure.

As we headed down the short runway, the sky lifted our light aircraft as effortlessly as a mother picking up her baby. While it felt as if we were being tousled about with the whims of the wind, I felt safely cradled in the bosom of Africa as it stretched in a massive expanse beneath us.

From our window seat, we watched the continent take shape. We witnessed rifts melting into flatlands, crops growing in geometric patterns, rivers snaking their way across rugged terrain, fires smoldering on the horizon, and herds of elephants, buffalo and zebra migrating in search of food. 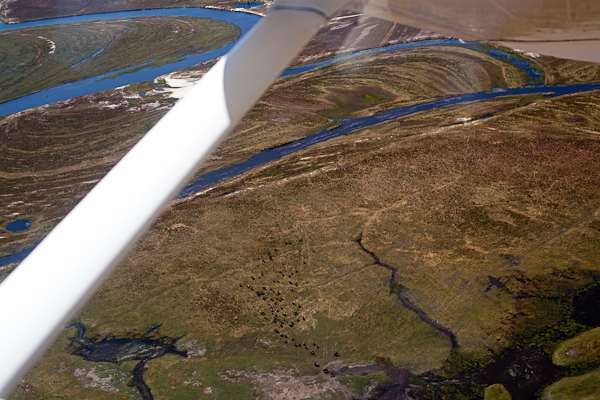 Our pilot followed the river to give us the best views of migrating herds, including this elephant family.

Circling Victoria Falls provided our most dramatic bird’s-eye view. Seemingly smooth, placid waters dropped hundreds of feet into a zigzagging gorge to continue the Zambezi River’s southward path. With each turn of our plane, a new rainbow revealed itself in the wake of the falls’ billowing spray. 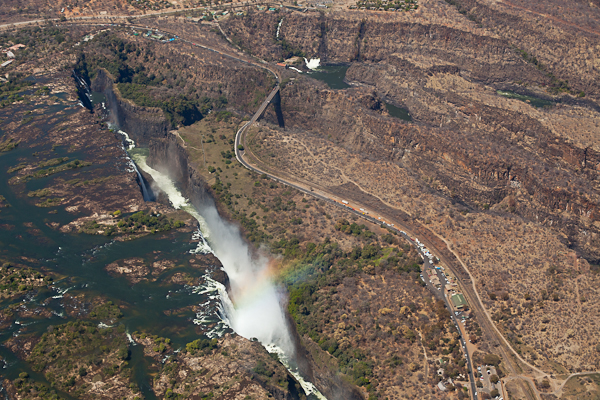 It’s the wild and unexpected side of Africa that impresses. Like each game drive on our safari adventure, part of the experience is not knowing what you’ll discover. A potential rainbow exists at every turn.

We built our safari experience around a variety of terrain and experiences. We started in Cape Town and ended in Johannesburg with stops at five camps in South Africa, Zambia and Bostwana during our 16-day visit.

This wasn’t our first safari. We visited Kenya and Tanzania during the wildebeest migration three years ago. We wanted to recreate that ideal safari experience on different terrain, so we traveled south.

It’s always hard to compare places when one has the advantage of first experience. Kenya and Tanzania offered more wide open plains, but South Africa, Zambia and Bostwana gave us a more diverse experience.

What we learned on our first safari is you can only take so many game drives before needing to stretch your legs. What I loved about the South Africa-Zambia-Botswana combination was our ability to incorporate boat rides, elephant experiences, walks, small and big city tours, wine country, village visits and mighty Victoria Falls into our itinerary. We also appreciated the contrast between wetlands and desert terrain.

Wake up and smell Africa

Despite the early morning wakeup calls, it’s easy to get into a rhythm on a safari.

Shortly before sunrise, you stumble out of bed and bundle up for the day’s brisk game drive. In late August and early September, we were transitioning from their winter into spring.

As you watch the sunrise either from your Land Rover or breakfast table, you’re thankful for that early-morning wakeup call.

There’s nothing like an African sunrise and sunset in the bush. They grab your heart and demand a moment of reflection as you watch the color show unfold. The massive ball rising and sinking on the horizon reminds us of our precious, limited time is on this beautiful planet. 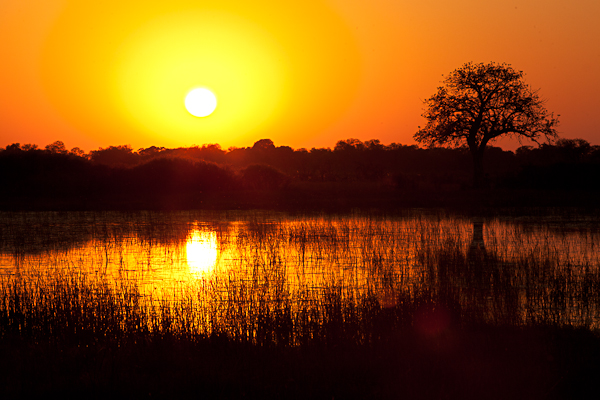 Sunrise at Vumbura Plains Camp in the Okavango Delta of Botswana

That first game drive puts all of your senses on high alert. In addition to gorgeous light, the smell of wet grass is as sweet and welcomed as a strong cup of coffee. No caffeine is needed to energize your senses. That's a good thing considering you'll want to be careful not to drink too much coffee to avoid having to stop to “check the tires” every few minutes.

Not to worry for caffeine addicts like myself. Toward the end of the morning drive, you can expect a nice coffee break in the bush. While it’s not Starbucks, the experience makes it one fine cup of joe. 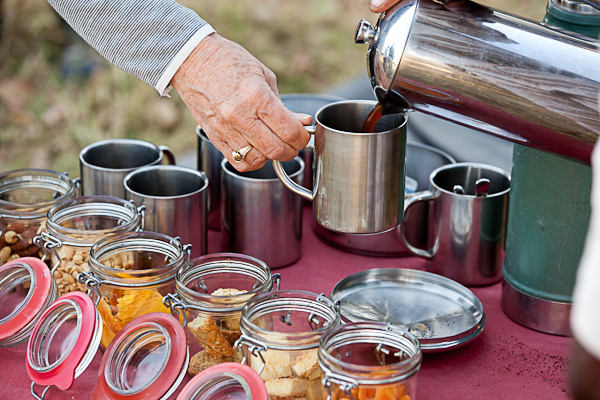 After finishing our morning game drives, we freshened up for lunch. Realizing that vacation revolves around food, at least for tourists like us, safaris are built around opportunities to dine and graze. 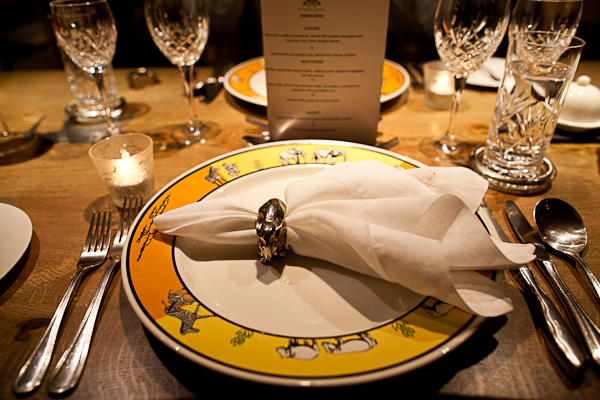 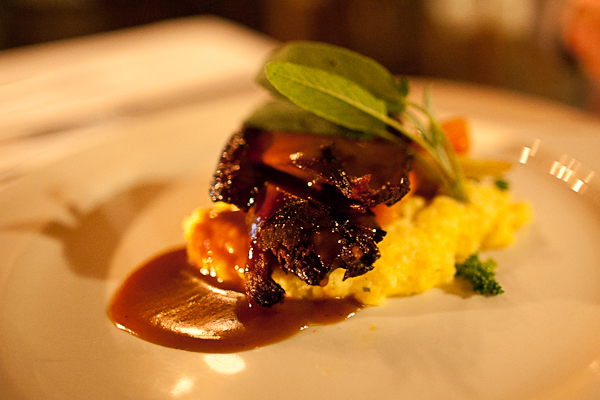 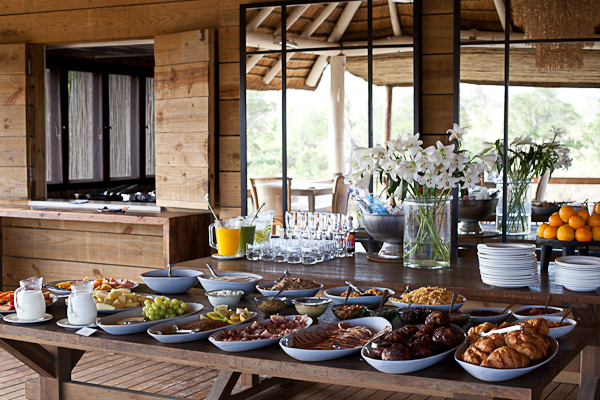 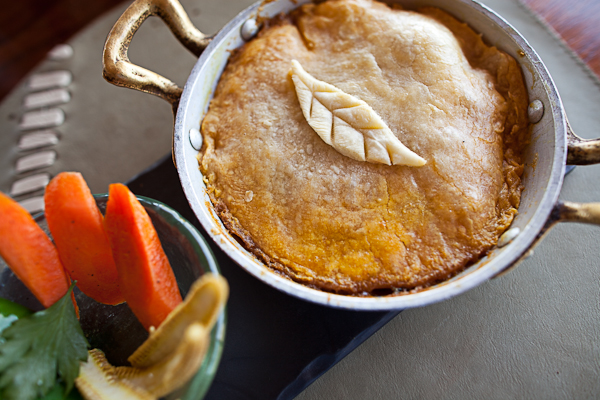 The second of a three-course lunch at Vumbura Plains Camp

Our day’s feeding routine included a light breakfast, coffee break, lunch, afternoon tea, sundowners (cocktails and canapés served with the sunset as the backdrop) and dinner.

Begin your safari with a few pounds to gain and comfy clothes with growing room. Adding excess poundage is difficult to avoid, especially when exercise options are limited.

Let’s just say you won’t be catching a run in the bush unless you want to be dinner. Just read Peter Allison’s “Whatever You Do, Don’t Run” book to get that point.

The day ends with a late afternoon activity, which in most locations is another game drive.

While these tended to have fewer animal sightings than the morning drive, you don’t want to miss a single one. You never know what you’ll find – whether it's a black rhino mock charging your vehicle, an elephant family making its way across the waterway you’re traversing or an elusive leopard slinking through the brush to escape detection. 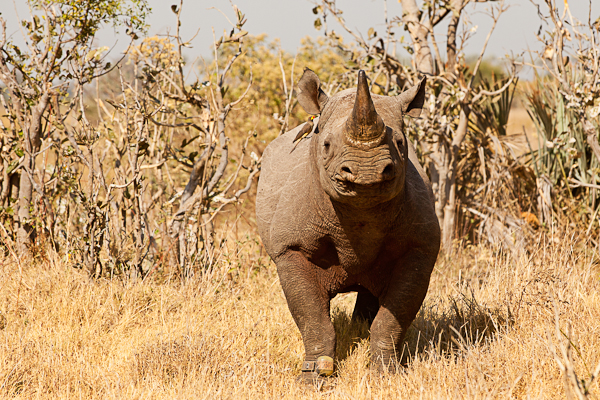 After a bit of hide and seek, we finally came across this black rhino, who faced our Land Rover just before mock charging it. 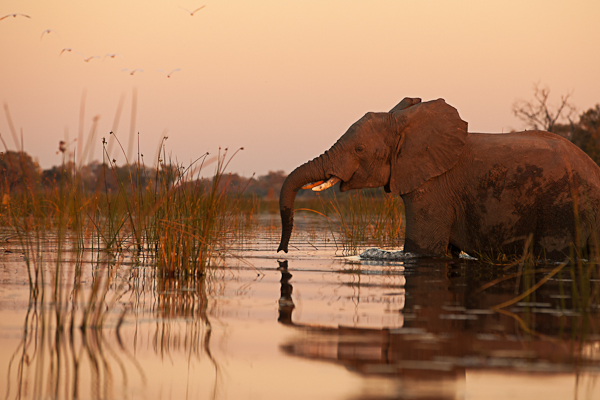 We were lucky enough to catch this elephant crossing the water from our close and comfortable mokoro boat.

Trust me. Don’t miss a single drive or you’ll hear about the incredible lion kill you missed from the other guests.

Admittedly, that sounds like something you’d want to miss. I’m not morbid, but there’s something about watching nature unfold on its own terms. Survival of the fittest is played out in front of you as a reminder of the cycle of life and how dependent all of us are on one another.

The call of Africa

Just as the day begins, it ends with a magnificent sunset. 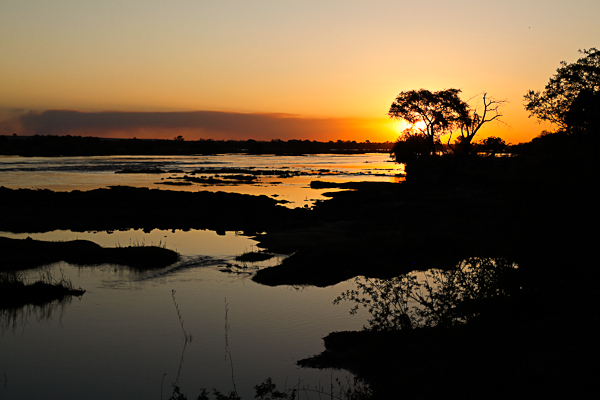 Sunset on the Zambezi River 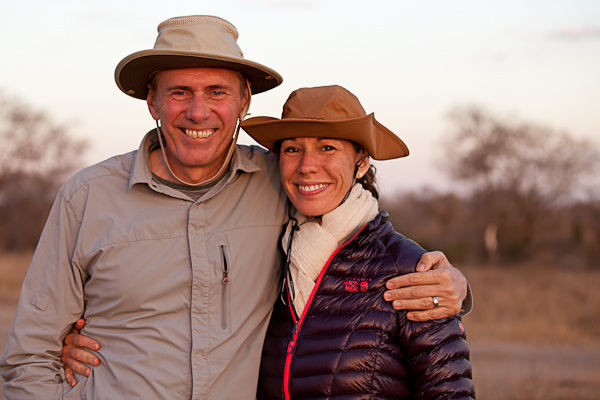 What signals a time to wind down for us, was a call to action for the lions and hippos around our camps.

Several of our camps were positioned around wetlands that came alive at night with the high-pitch pinging of reed frogs the size of my fingernail. The cacophony they create is mesmerizing. 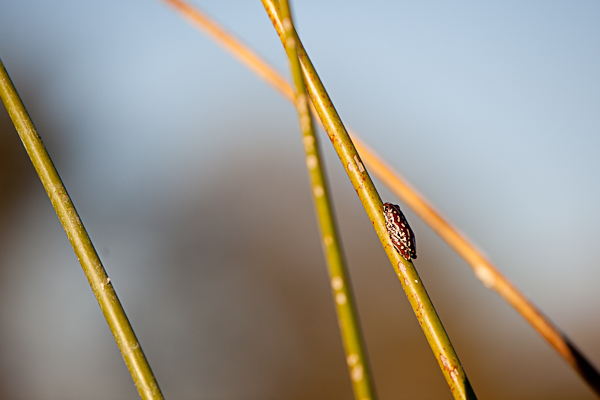 It's amazing how much noise this little guy and thousands of his friends can make at night. Rock on, mighty reed frogs.

Without a TV to distract us, we directed our full attention to the sounds of the night. Lions roared – sometimes in an alarmingly close proximity to our camp. Hippos sloshed about and grunted like pigs stifling a deepened squeal. Baboons scampered atop our tent.

As night transitioned to day, African birds serenaded us in a language foreign to us. These were unlike any bird calls I had heard before, which made them all the more beautiful.

When traveling to Africa, it’s much more than a visual experience. It’s a trip for all of your senses. See it, smell it, taste it, hear it and feel it. Most importantly, delight in the unexpected.

What do you love about safaris? Which is your favorite country in which to experience a safari?