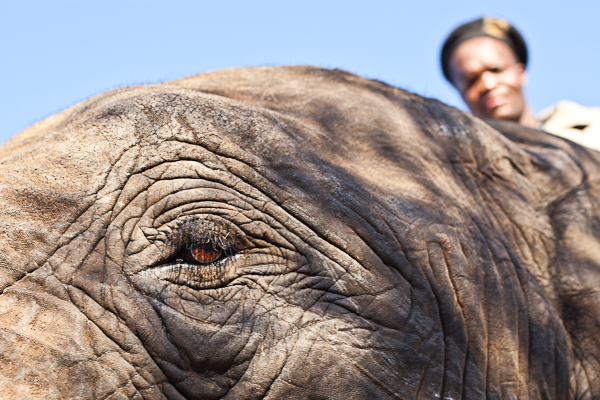 Ever since my first trip to Africa, I’ve had a thing for elephants.

I was smitten after watching them romp around in their family units, greet one another with the shake of their trunks and protect their young by positioning them between their legs. They are all heart – and they had a hold of mine.

When it came time to plan our next trip to Africa, I knew I wanted to learn more about these gentle giants. We got our elephant fix and more at Camp Jabulani.

The camp started with an orphan elephant taken in by the Hoedspruit Endangered Species Centre.

Found injured and abandoned in a dam, the center nursed the 4-month-old back to health and named him Jabulani, which means “to rejoice.” Despite attempts to reintroduce Jabulani to the wild, he preferred to be with the humans who raised him.

The idea for the camp hatched five years later in 2002, when the center rescued 12 Zimbabwean elephants that were about to be slaughtered for their meat. Already trained for elephant-back safaris, the camp became a way to support the pachyderm family, which fortunately accepted Jabulani as one of its own.

Before I begin to describe the elephant experience that unfolded, let’s talk about the camp. The property lives up to its Relais & Chateaux accreditation.

The people, facilities and food are warm, interesting and one of a kind.

After a short ride from the Eastgate Lughawe Airport to Camp Jabulani located in the privately owned and managed Kapama Game Reserve, its general manager, Kate, promptly greeted us at the entrance. 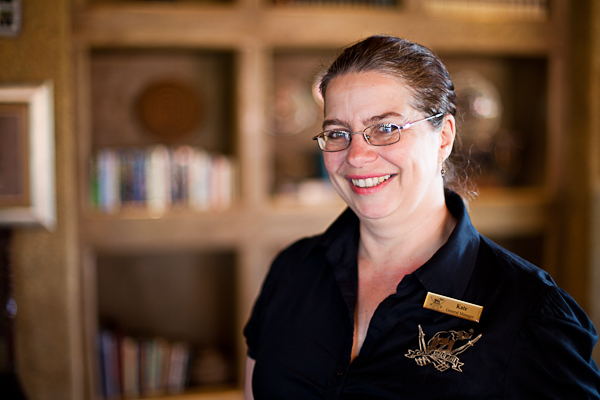 She welcomed us with a fruity drink and gave us a quick tour before seating us for our first three-course lunch of the trip. 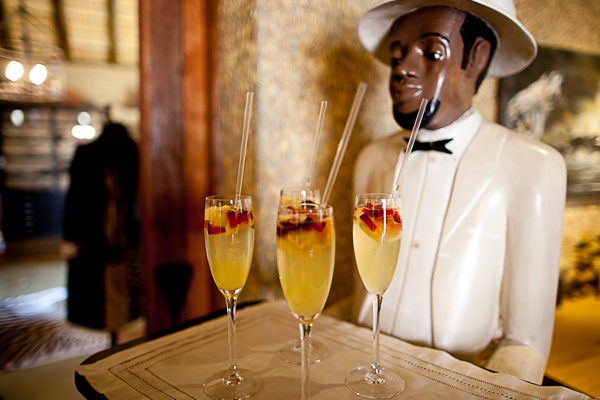 To ensure plenty of room for dinner, portions were modest, but they didn’t skimp on taste.

Camp Jabulani’s chef, Dylan, is talented and kept us looking forward to each meal. Throwing caution to the wind, I expanded my culinary horizons by trying warthog and ostrich. The former I’d repeat but the latter I’ll just chalk up to an interesting experience.

In celebration of my birthday, the staff set us up for a private dinner in the wine room, where we chose a bottle directly from its shelves. They topped off the evening with a homemade chocolate dome cake covered in ganache. Happy birthday to me, indeed!

We especially liked how the camp paired us with a consistent waiter throughout our stay. We were lucky enough to get Shadrick, whose smiling face stayed with us from first to last course. 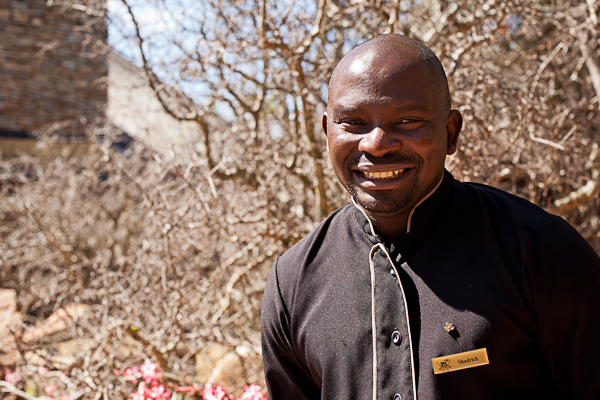 And then there was Ruan, who was our patient and accommodating guide, as well as the trainers and caregivers of the elephants. Everyone made our stay special. 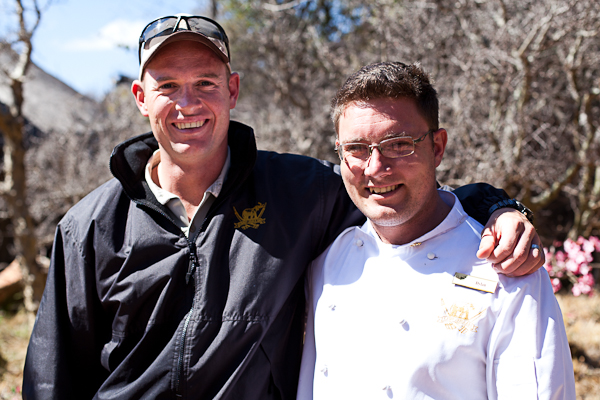 Our expert guide, Ruan, poses with our chef extraordinaire, Dylan

The regal accommodations blew us away. While every detail oozed poshness, it had an authentic bush feel from the thatch-covered roofs to the interior walls covered in what looked like a mixture of straw and mud.

The property has six suites accommodating up to 12 people and plenty of open-air public lounging options. A bridge separates the suites, which are protected by an electric fence to keep the animals at a safe distance, from the public spaces.

Our suite included a fireplace, which they offer to light for you each evening, a plunge pool, outdoor shower, tub (a true treat in the bush we later discovered) and mosquito-netted bed.

Interested in a massage? No problem. Arrange for tables to be set up in your room anytime you desire. 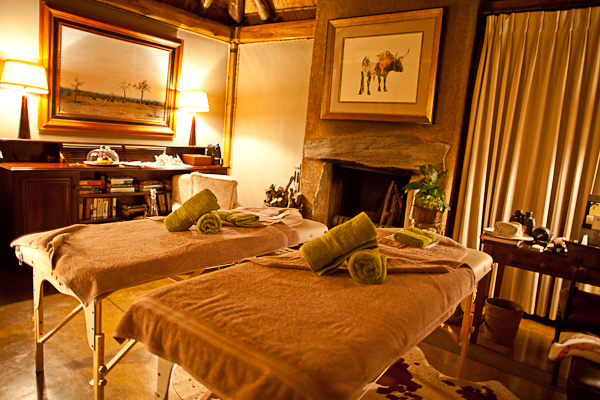 Admittedly, we wouldn’t have indulged in this treat unless it was included as a part of our package. Once again, it pays to book with a connected travel agent (thanks, Randy Brandt) who can score some nice perks.

Kissed by an elephant

Camp Jabulani offers such an intimate elephant experience, you just might get kissed by one of these African beauties.

Let me explain myself.

It started with a simple request for a volunteer from the group during one of the elephant interactions. What followed were instructions from the trainer to Jabulani to remove my hat with the finger-like ends of his trunk. 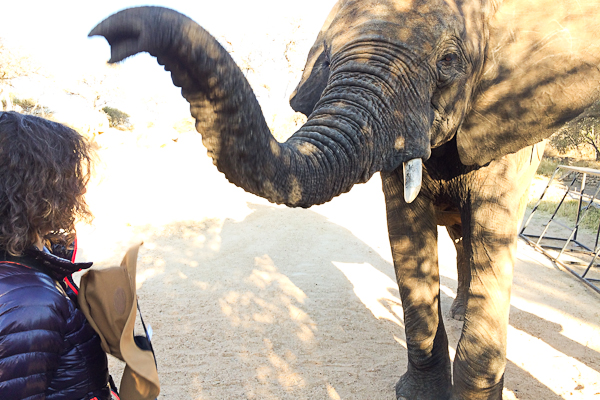 Hat trick, aka kiss, in progress 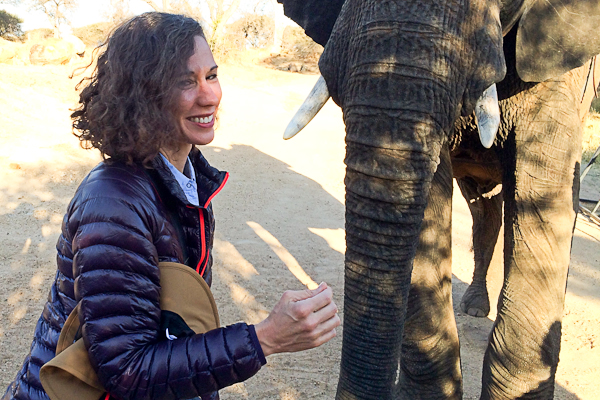 Let’s just say it’s not a perfect science. Expect your face it be lightly grazed in the process, which may include lips making contact with his moist and dexterous trunk. That qualifies as an elephant kiss in my book.

The rest of the interaction included the opportunity to touch the bottom of his feet, gently stroke the back of his delicate ear and, for those brave enough to put our hands in his mouth, touch his tongue.

Everyone had the opportunity to pose with the camp's namesake, Jabulani 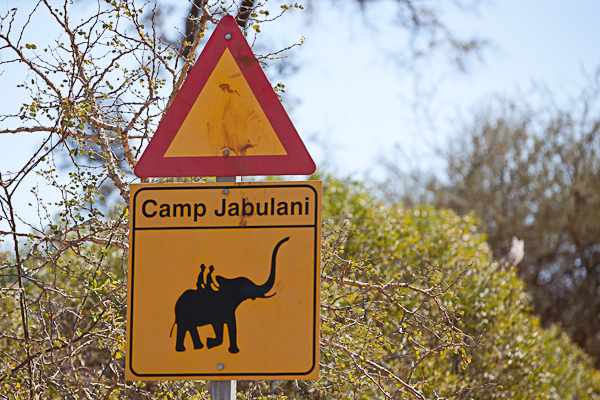 During our two-night stay, we participated in two elephant-back safaris lasting about an hour each. One took place during the afternoon and the other followed sundowners in the evening. 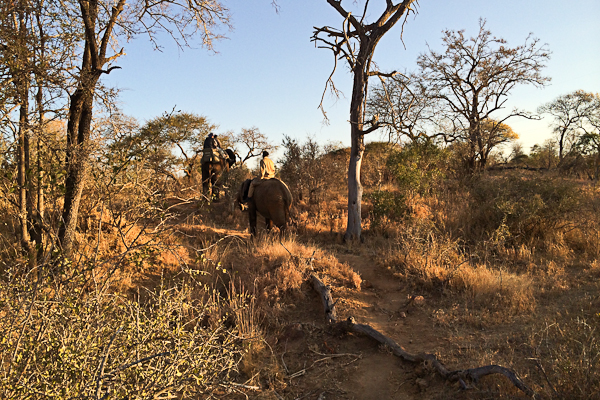 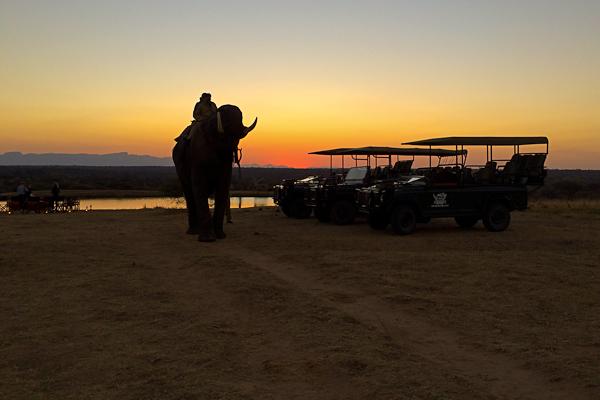 The camp claims to have the only nighttime elephant-back safari in the world. We couldn’t have asked for a better night to ride. With a mostly obscured moon, we rode under the most vivid Milky Way galaxy I had ever seen.

As we walked under a canopy of stars stretching from horizon to horizon, the young elephants without riders followed their mothers. I’ll never forget the vibrations we felt as the elephants conversed during our walk. Hopefully, they weren’t plotting where to dump us along the way. I assume not, since we made it back safe and sound. 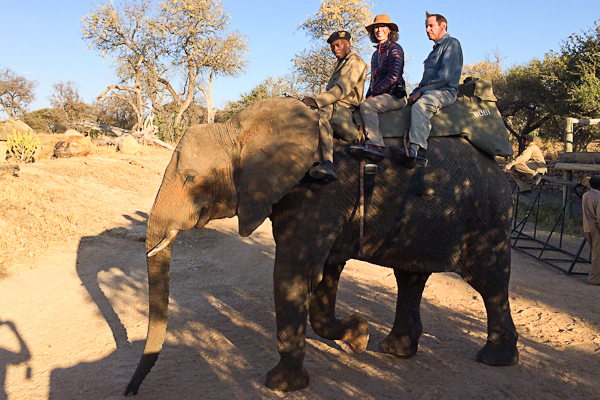 Bubi, the sweet mama who took her time on our late afternoon ride

Our evening walk ended with a visit to the elephants’ stables, where we had the opportunity to feed them. 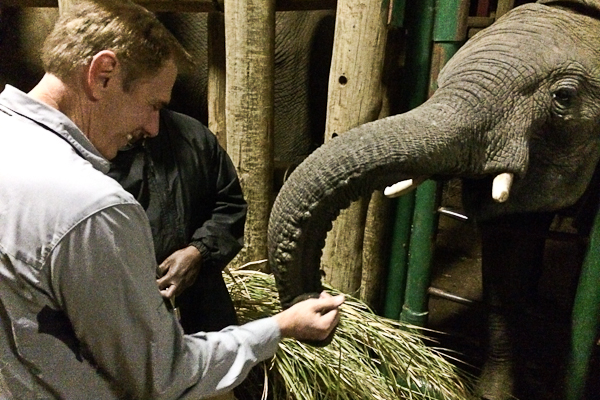 To my relief, the trainers explained they only use positive reinforcement (i.e., treats) and no punishment in their training techniques. 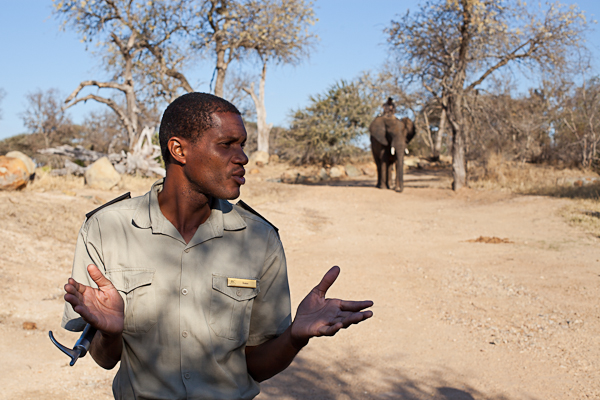 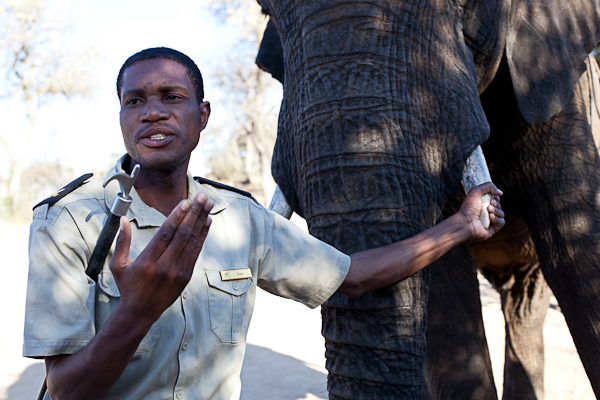 Based on the elephants’ insistence for treats before their walks and other performances, the powerful lure of pellets is ample motivation. 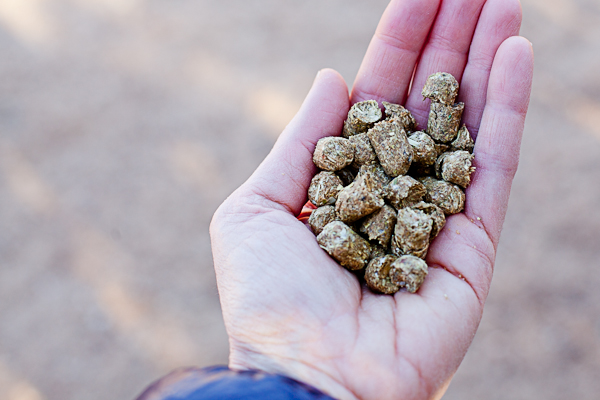 The facts of elephant life

During our ride, the trainers shared many interesting facts about elephants.

They are non-stop eating machines – not unlike us during our safari experience. Elephants forage about three-quarters of the time, consuming about five to seven percent of their body weight. Considering they only digest about 44 percent of their food, frequent grazing is required for their survival.

Elephants also enjoy a good mud bath and swim. One of the highlights of our elephant experience came with their daily visit to a swimming hole. 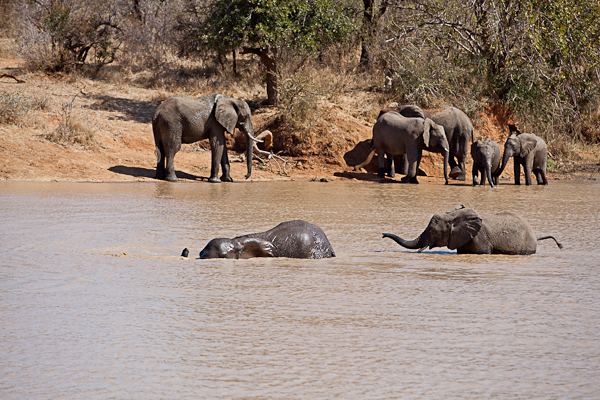 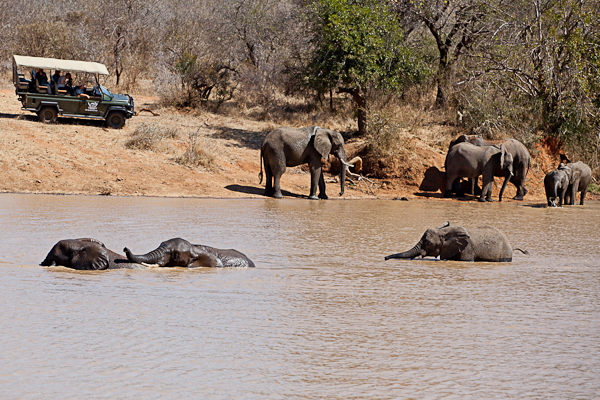 They didn’t just wade through the shallow end. Several of the elephants fully immersed themselves, diving deep for buried treasures of tree roots and branches lining the bottom of the pond. They used their trunks like snorkels as they swam. 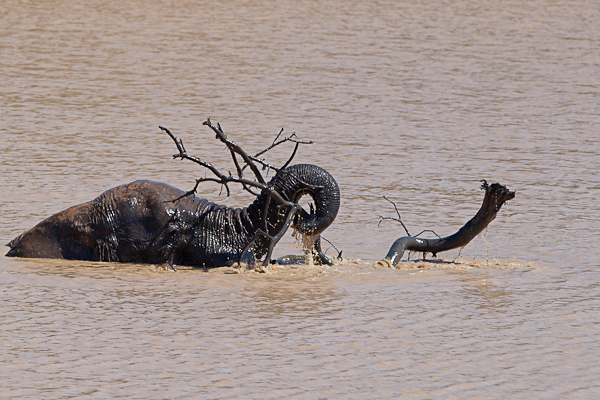 Others dug up and created a pool of mud to spray on themselves. In this elephant spa, forget wrinkle elimination. The mud is all about protection from the sun and parasites. 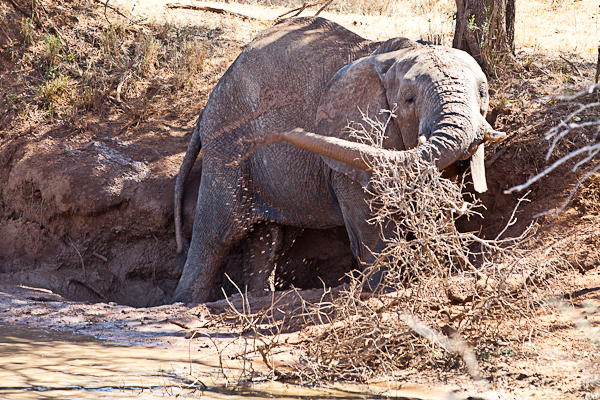 As if the elephant experience wasn’t enough, there’s more. A visit to Camp Jabulani includes a VIP treatment at the Hoedspruit Endangered Species Centre, where it all began.

The center focuses on the conservation of rare, vulnerable or endangered animals, with cheetah conservation being one of its core disciplines.

During our visit, we watched hundreds of vultures devour some of the foulest-smelling carcasses of I-don’t-know-what-animal during feeding time. More animal morsels were fed to a pack of wild dogs, one of the most endangered of species in the world. During the feeding, the two alpha dogs left the third out of the feast until they had had their desired share.

We watched a group of cheetahs as they frolicked and played in one section. Others were separated as part of their rehabilitation or in preparation for mating. 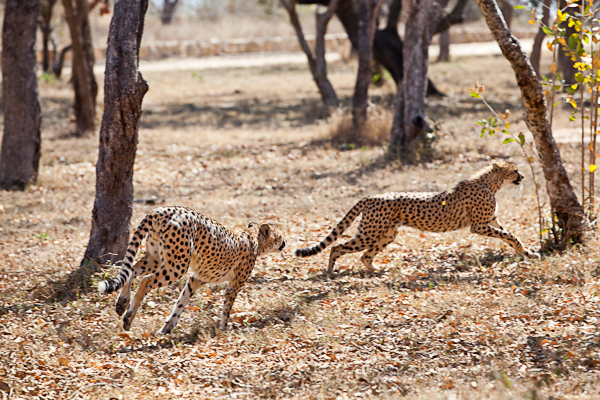 The best part came when we arrived at Crunchie’s enclosure. Ruan explained that for our next adventure, we’d be entering the cage to pet the wild cat. In his slumber, he didn’t seem wild, but we took to heart the warning not to pet his paws or belly.

We gently stroked his coarse coat and were happy to pose for a few photos. Crunchie seemed quite comfortable with his stardom.

Upon arrival, we were quickly plotting how to extend our visit, realizing two days wouldn’t be enought. How could any other place compare?

Safaris require advance planning and are not easily rearranged at the last minute, so take your time to carefully consider the pace of activities you want to enjoy with each camp.

My advice for planning a visit to Camp Jabulani, stay three nights. It allows for a much more relaxed pace between all of the activities Camp Jabulani offers including game drives during the morning, late afternoon and into the evening.

Even if you aren’t passionate about elephants, a visit to Camp Jabulani is unforgettable.