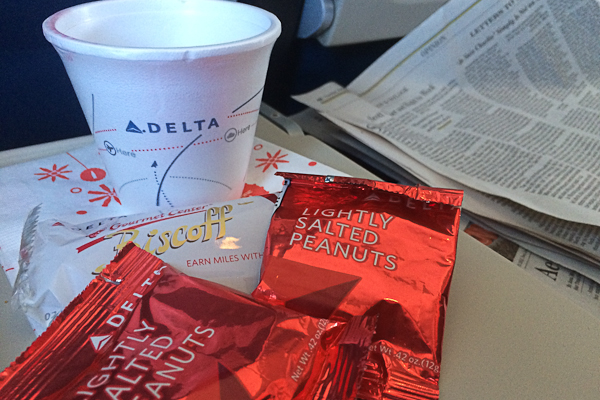 "Peanuts, pretzels or cookies?" our cheerful flight attendant asked. It's not an option we hear often on domestic airlines in economy class.

You're lucky to get an offer for a measly pack of peanuts these days, so it was a welcomed temptation during a recent flight on Delta Air Lines.

In our experience, canceled flights and delays seem to be the norm for many airlines, especially American and United.

Is Delta becoming the Southwest of large international carriers? I hope so. Let's just say I'm thrilled our next three flights are booked on Delta.

Not surprisingly, Delta has taken the No. 1 spot in customer satisfaction among legacy carriers, according to the 2014 American Customer Satisfaction Index (ACSI). Among all carriers, JetBlue and Southwest still reign supreme. In 2014, Delta also landed the title of 2014 Airline of the Year by Air Transport World magazine.

About six years after its merger with Northwest, Delta has gotten it together after considerable bumps along the way. I remember a time after the merger when I was less enamored with Delta. Maybe there are some lessons United and American could apply to fix its post-merger turbulence.

As far as my wish-list for airline improvements goes, getting rid of change fees would go a long way in helping me choose one carrier over another. Thank you, Southwest, for not jumping on this annoying revenue-generating bandwagon.

Improving frequent fliers' ability to actually cash in mileage would be another win. What is called a loyalty program ends up being a sure-fire way to frustrate and alienate even the most advance-planning frequent fliers.

Whatever you do, dear airlines, keep safety your top priority. Despite recent headlines of airline disasters, I'm still amazed at the safety of these high-speed metal tubes. Yes, I still fret over those occasional bumps you call air pockets, but I can usually quickly calm myself down with statistical reasoning.

It’s worth a little turbulence to see more of the world with relative ease.

Bravo and keep up the great work, Delta! You’ve got our loyalty for now.

Which are your favorite airlines and why? What are your biggest airline frustrations?