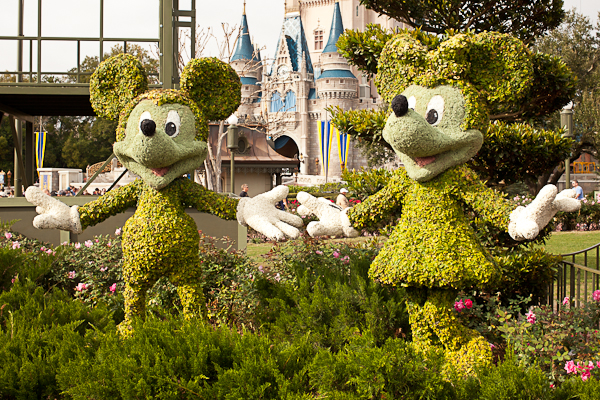 My memories of visiting Walt Disney World as a young child are faint. Fortunately, I have photos of riding Dumbo and chatting it up with Eeyore to jog my memory of that family trip.

In my 20s, I started contemplating a return visit. I thought it would be cool to visit Epcot to see all of those countries and cultures in one location. I would love to have whispered into the ear of my 20-something self, “Hang tight – travel adventures are coming.”

Even with many worldwide trips behind me, I still get a thrill visiting Disney World as an adult. Admittedly, the sticker shock of anything Disney and more-frequent-than-normal child meltdowns at the happiest place on earth would have one think otherwise. Au contraire.

There’s something truly American and beautiful about the place. Disney is all about the pursuit of happiness in its sticky, gooey wonder. Sure, it gets a little messy at times, but that’s part of the fun.

In the spirit of entrepreneurial appreciation, watching the successful consumer-driven business make the magic happen is something to behold. Yes, Disney is a marketing machine, but what’s the crime when the goal is to create a magical experience? If you’re feeling a bit jaded by the consumerism of Disney, take comfort in the number of jobs you’re helping create.

There is a constant buzz of activity from more than Disney’s guests. An impressive number of “cast members” are performing a myriad of tasks from power-washing sides of buildings and orchestrating mass transit to performing in street skits and photographing guests at scenic points throughout the parks.

Raised eyebrows are the normal reaction we get from most people when we tell them we’re traveling to Disney World without kids. They really think we’ve gone to la-la land when we reveal it’s our third time in eight years of marriage to make the visit.

The secret to a good marriage? Well, it certainly doesn’t hurt to remind yourself to lighten up and laugh. Based on the number of couples there we saw tying the knot and celebrating anniversaries, we’re in good company.

What’s to love about Disney as a grownup? Let me count the ways. 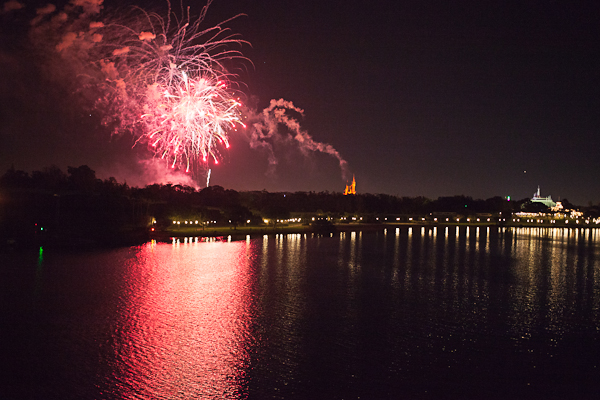 Fireworks every night. Get your mind out of the gutter. I’m talking about the bright, colorful, sky-bursting kind of fireworks. No half-hearted attempts, but full-fledged, Fourth-of-July-length celebrations take place every night at Magic Kingdom. Epcot offers fireworks combined with an impressive laser-light show and evolving earth that moves through its center lagoon to cap off its park hours. Both shows are worth sticking around to watch. 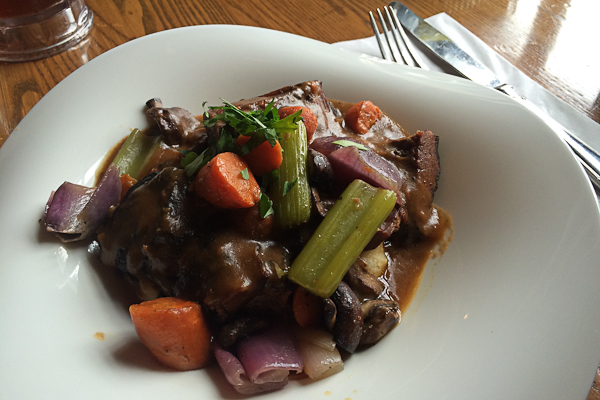 Food for every taste. Whether you’re interested in eating Mexican beneath a steaming faux volcano or dining like royalty on a seven-course tasting menu with wine pairings, Disney caters to every taste. Choosing where to dine is half the fun.

Want to celebrate Oktoberfest in at a German beirgarten, dine on Moroccan fare while you’re entertained by a belly dancer or watch old sci-fi movies from the comfort of a 1950s car? Just imagine and it can happen at Disney World. 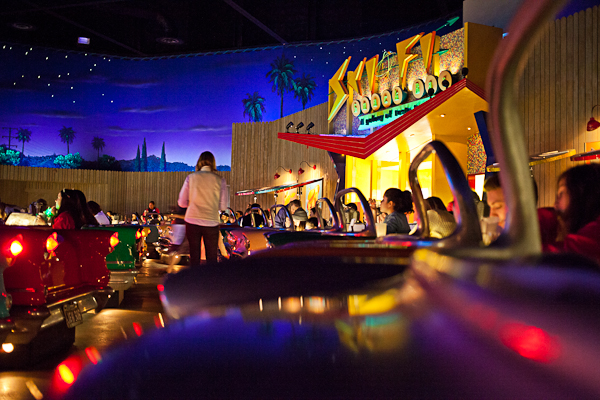 Insider Tip: Make your reservations for lunch and dinner in advance of your trip. Tables for some of the more popular spots book up early. Just remember to cancel within 24 hours to avoid a $10 per seat penalty fee. 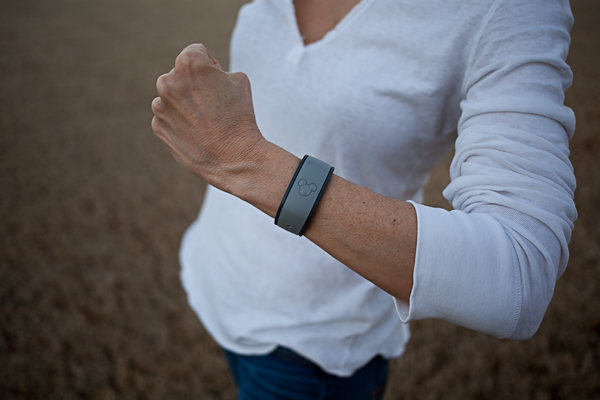 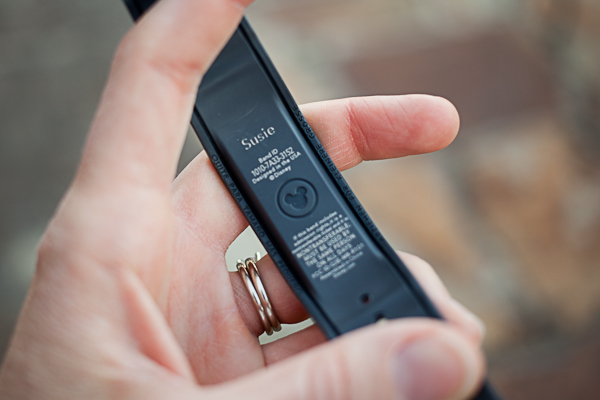 At times, I felt a bit like Wonder Woman as I drew up my fist to scan my way into places. Then I felt like a fool as I scanned my bill. Oh, how quickly it adds up at Disney.

Insider Tip: If you’re staying on property, have your purchases delivered back to your hotel room. That’s another nice Disney touch that gives you even fewer excuses to say no to Disney merchandise. 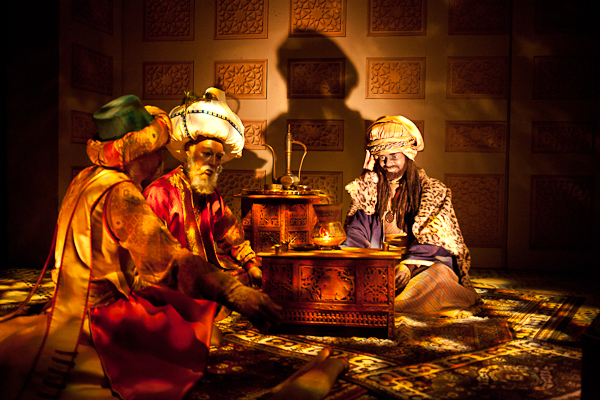 The story of communication unfolds on Spaceship Earth.

Rides with story-force. You can count on Disney’s rides to be equally compelling in story-force as g-force. 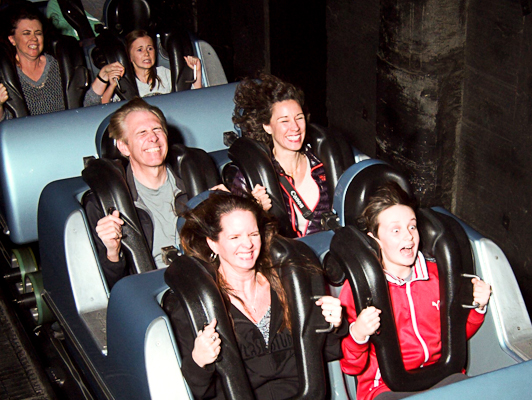 Ride through the Himalayas and just miss the grasp of the Abominable Snowman. Board a time rover to save a dinosaur from extinction. Speed through LA traffic in a super-stretch limo to catch an Aerosmith concert. Enter the Twilight Zone aboard a haunted and possessed elevator. Hang glide above some of America’s most scenic sites.

Disney’s rides are plenty thrilling in terms of g-force, twists and turns, but the storyline is what makes them soar.

Insider Tip: Use your FastPass to avoid waiting in long lines. Thirty days in advance of your visit, you can reserve up to three FastPass experiences per day at a theme park. If you’re staying at a Disney resort hotel, you can book them 60 days in advance. Download the My Disney Experience mobile app to make changes from your phone instead of lining up at kiosks around the park. 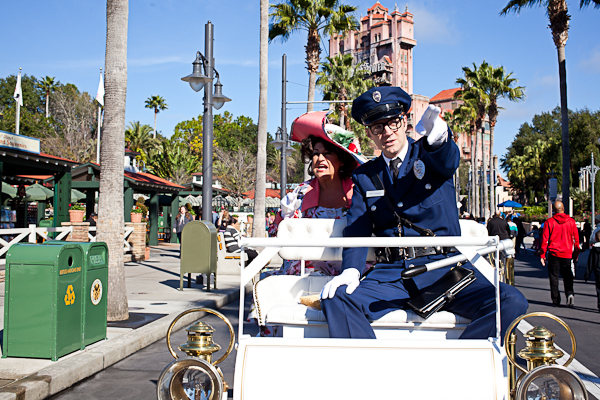 Roving performances. Stop and watch the performances moving through your theme park of choice.

We got a huge kick out of watching the stars at Hollywood Studios ham it up. One routine included a tipsy cowboy sitting on a bench, drinking fake martinis and cracking jokes with children next to him. The inappropriateness added to the humor. 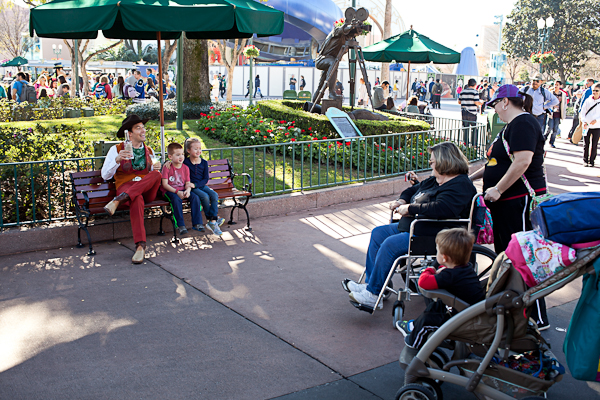 Outside of the Parisian café in Epcot, an acrobatic “waiter” climbed a tower of chairs to a cheering crowd. 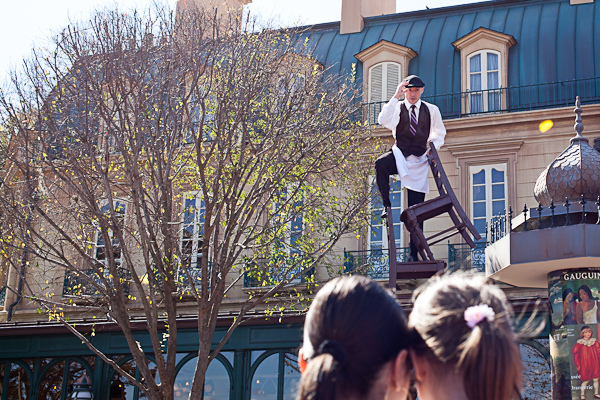 Everywhere you walk, entertainment is happening. That’s the Disney magic.

Insider tip: Between FastPass appointments, take the time to meander the park and watch the performances unfold. The parades and scheduled shows are fun, but the impromptu performances are some of Disney’s best.

After a full day at the park, it always felt good settling back into our room. Whistling trains and puttering boats outside our window made for sweet dreams.

Disney feels a bit like Christmas did when we were kids. Each morning we eagerly awoke to unwrap the gifts awaiting us at each park.

While we’re not making tracks in the real world, Disney opens us up to a world of imagination. This connection to childhood dreams and wonder is enough to keep us coming back for more.

What are your favorite Disney moments?

0 # Maggie 2015-02-10 14:58
Really enjoyed this article as I'm reliving our Disney venture during New Year's week. I'm ready to go back, especially when it's less crowded (if there is such a time). I would avoid the time period we were there if possible though Disney does a great job keeping us all smiling while waiting.
Reply | Reply with quote | Quote | Report to administrator
0 # Susie 2015-02-10 15:53
Thanks, Maggie! I agree that timing is everything when it comes to Disney World. We thought we had steered clear of crowds by timing our trip in mid-January, but we hadn't considered the Martin Luther King Jr. holiday weekend.

You're right. Disney does a good job of keeping you smiling even in the long lines.
Reply | Reply with quote | Quote | Report to administrator
Refresh comments list
RSS feed for comments to this post