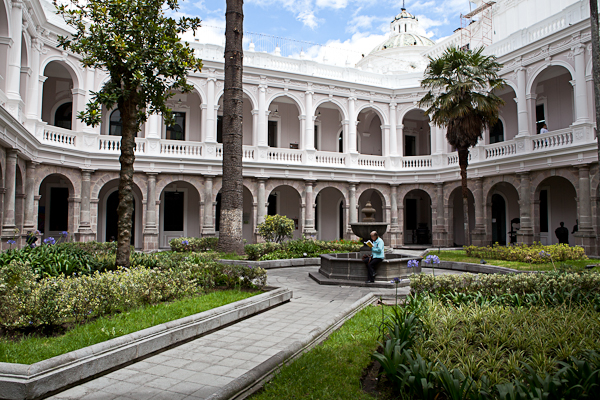 Beauty in Quito is more than street deep. We stumbled across this courtyard off of one of its busy streets in Old Town.

We were just passing through on our way to the Galápagos Islands. We had booked two nights in Quito, Ecuador, to avoid any chance of missing our ship in case of plane delays.

What a mistake it would have been to not have given this city its due touring time. If you’re heading to Galápagos, intentionally pass through Quito and plan to spend a few nights there. 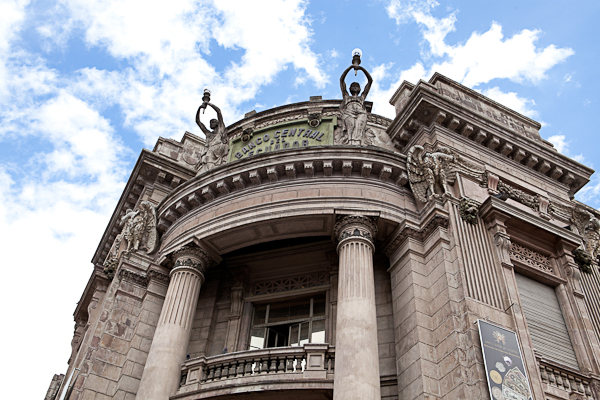 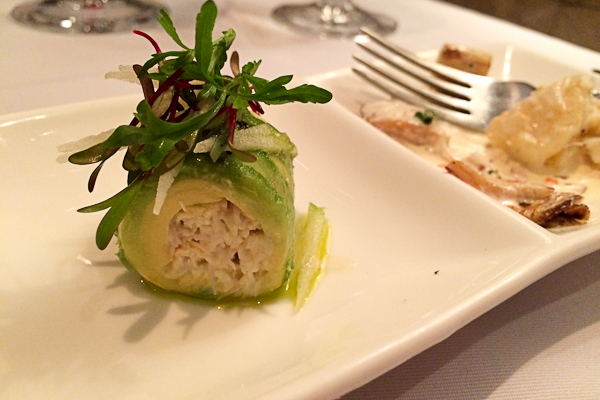 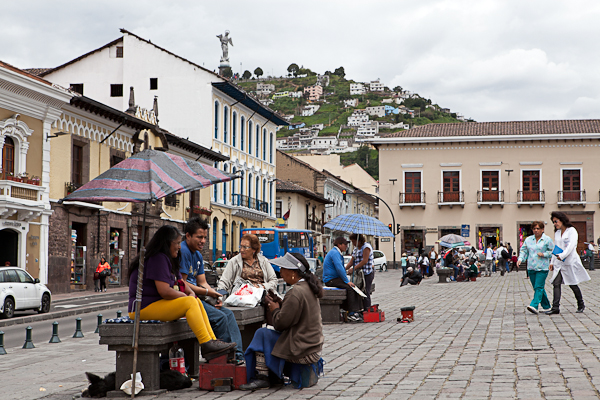 Quito has all the makings of a fantastic stopover. Heck, you could build a trip over several days around this beautiful city.

I guess my first clue should have been its UNESCO status. Quito is one of the first cities UNESCO named as a World Heritage Site in 1978.

It’s also the second highest capital city in the world after La Paz in Bolivia. At an elevation of 9,350 feet, it pays to have an extra few days here to acclimate. I arrived with a pounding headache, but recovered fairly quickly. Word to the wise, drink lots of water.

There's a lot to like about Ecuador’s second largest city with approximately 2 million people calling it home.

We had the advantage of entering the city at night, when it’s blanketed with sparkling lights.

At daybreak, we quickly gained perspective on Quito’s dense population. 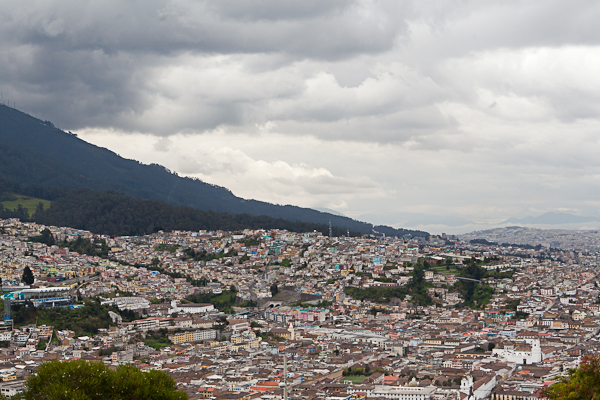 The homes and buildings are packed below the Pichincha Volcano’s looming presence.

This sleeping-yet-still-active giant hovers over the city at 15,700 feet. The volcano covered the city with several inches of ash after its most recent eruption in 1999, serving as a constant reminder to live in the moment.

As you walk Quito’s streets, you can’t help but feel the Spaniards’ influence. Taking control from the Incan Empire in the 1500s, they reigned until Quito gained its independence in 1822. 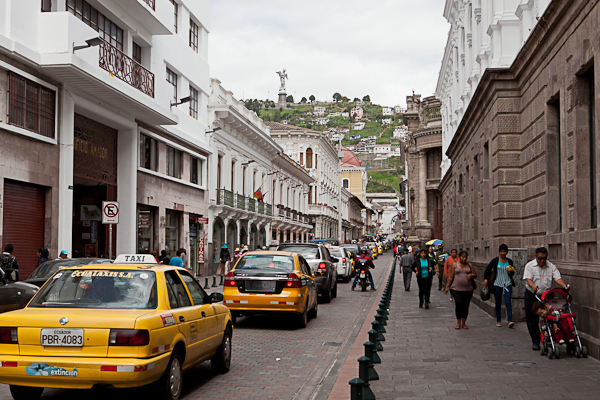 While you’ll find modern architecture as you move away from the Old Town area, Spanish colonial style still dominates.

Despite a major earthquake in 1917, the city has the best-preserved, least altered historic center in Latin America, according to the UNESCO website. While my experience exploring Latin America is limited, I’d agree. 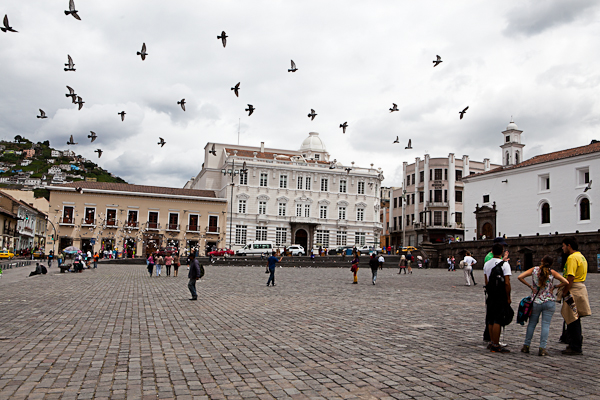 San Francisco Square is one of Quito's largest. Besides tourists, many locals – and pigeons – flock here. 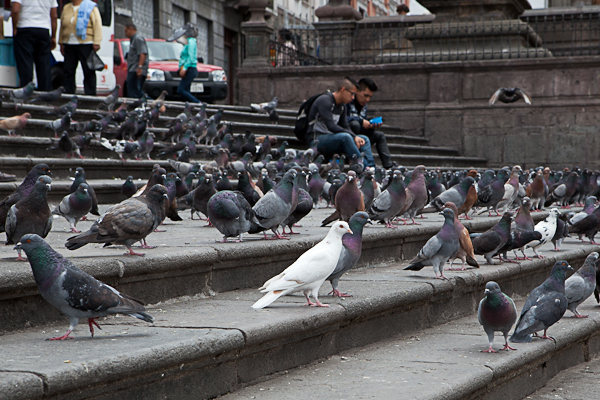 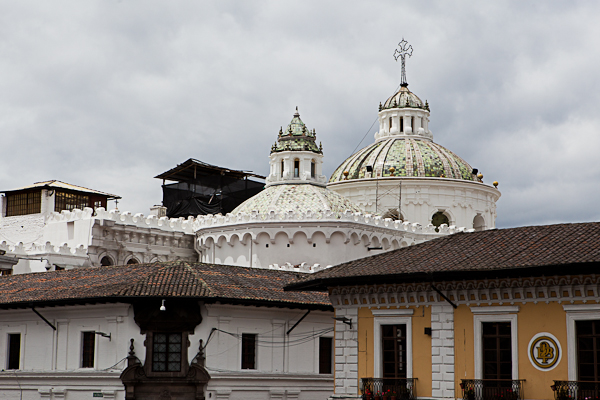 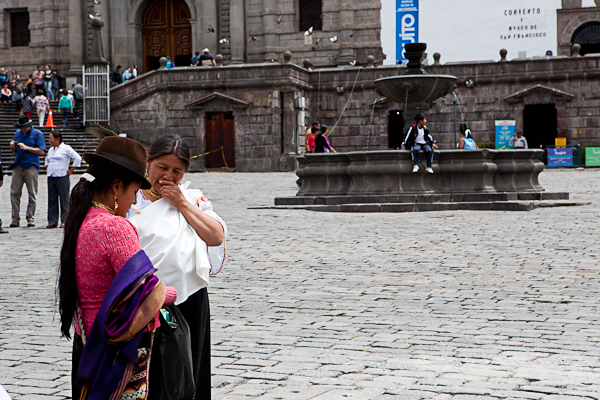 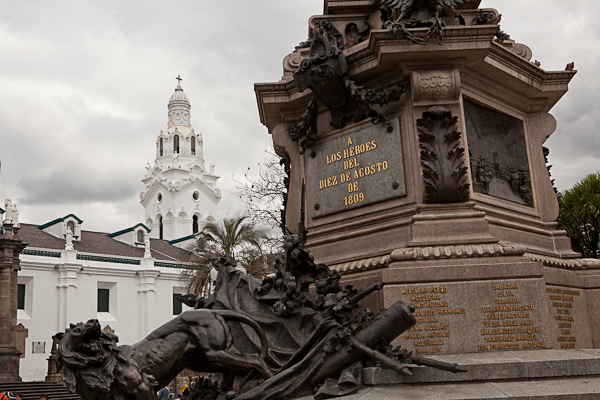 A monument to the heroes leading the first cry for independence is centered in Quito's Plaza Grande. In the background is the Cathedral of Quito. 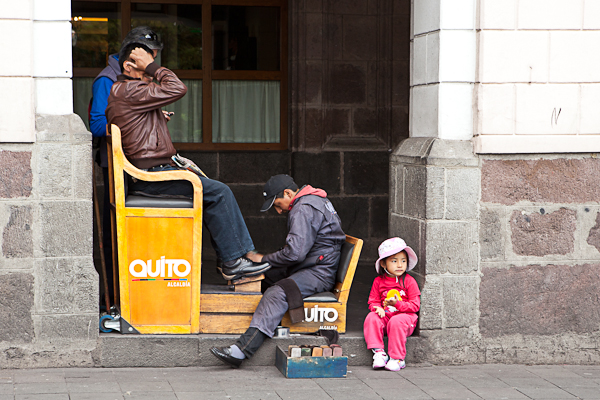 Shoe-shining is serious-but-social business along the Plaza Grande. It also appears to be a family affair.

One stop you can’t miss on your Quito tour is getting an angel’s view of the city.

Cerro Panecillo is the spot to visit the almost 10,000-foot Virgin of the Americas statue that dominates the skyline from Quito’s Old Town. What made the statue unique for the time is its depiction of movement compared to the other more stoic and still symbols of the Madonna. 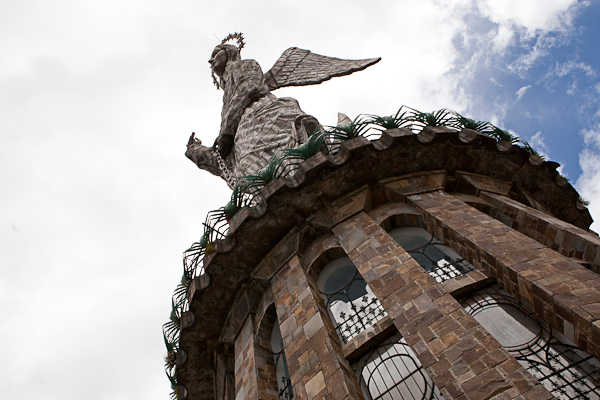 More impressive than the statue is the panoramic view of the city. You quickly gain perspective on the city's size.

From this vantage point, it’s easy to see why the Inca’s used this hill as a sacred location from which to worship the sun. After the Spanish invasion, Cerro Panecillo transitioned to a fortress for keeping watch over the city. 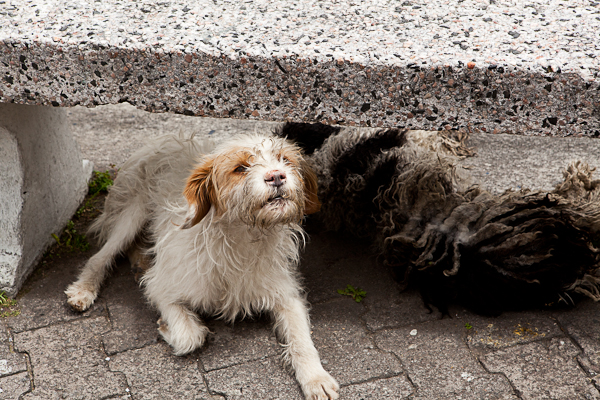 Beware of stray dogs hanging out with the angel. Just as I leaned in to snap a photo of this scrappy dog, he snapped back. I'm a sucker for dog shots, but these animals are no angels.

With Spaniard domination came grand catholic cathedrals. One of its finest – and many say the best baroque style in Latin America – is the Society of Jesus Church, or La Compañía as it’s known locally. 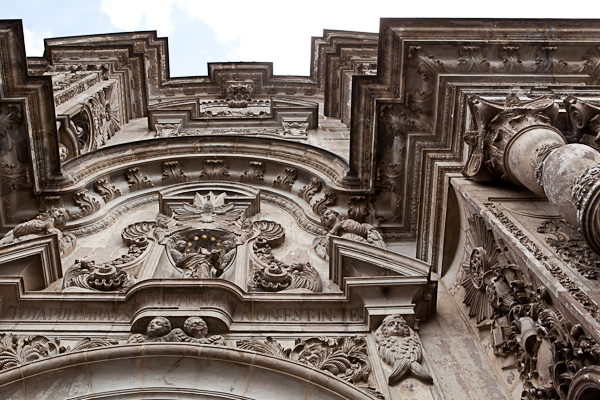 The only shot I could capture of La Compañía was this exterior one. Inside and out, the detail of this church is amazing.

It takes gilding to the extreme, with 23-carot gold leaf covering every bit of this precious treasure of a church. Built between 1605 and 1765, the nave is topped with an 85-foot barrel vault decorated with Mudéjar figures in gold leaf. The dizzying detail of the church is difficult to fully appreciate with a single visit lasting only a few minutes.

It would be incredible to contemplate the church’s beauty while listening to the 1,104-pipe organ play, which supposedly still happens for special concerts.

There are several other churches worth stopping in to see.

Take in the neo-Gothic style of the Basilica of the National Vow, adorned with gargoyles of sea turtles, monkeys and iguanas. No doubt you're in South America and near the Galápagos Islands when you look up at this church. 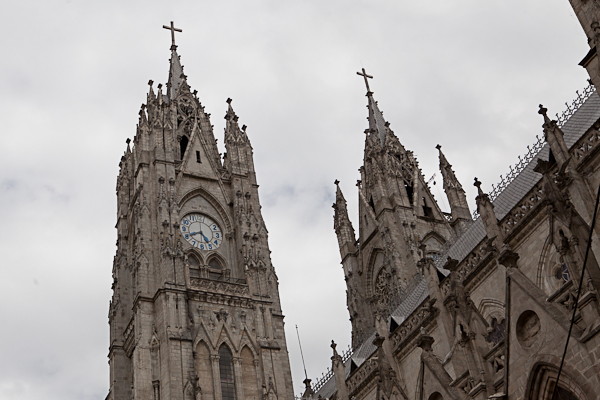 Basilica of the National Vow 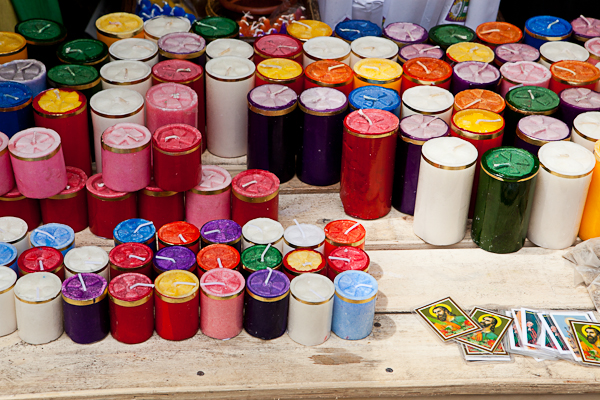 Candles for sale outside of the Cathedral of Quito 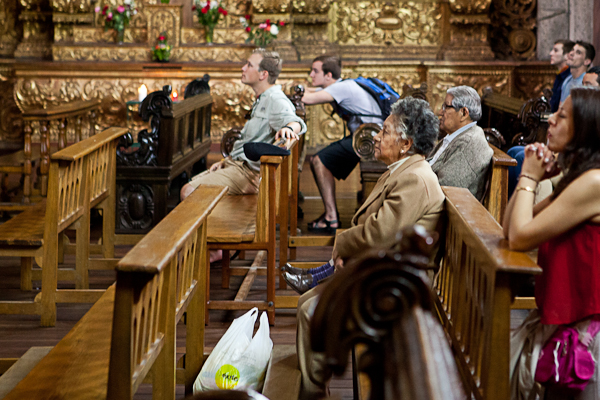 Our tour guide told us we needed to try the local favorite potato and cheese soup, locro de papa. It could have been the version we tried, but it was a bit on the bland side to me. Of course, I’m used to the Americanized version with heaps of cheese, bacon and scallions to get the taste buds going. 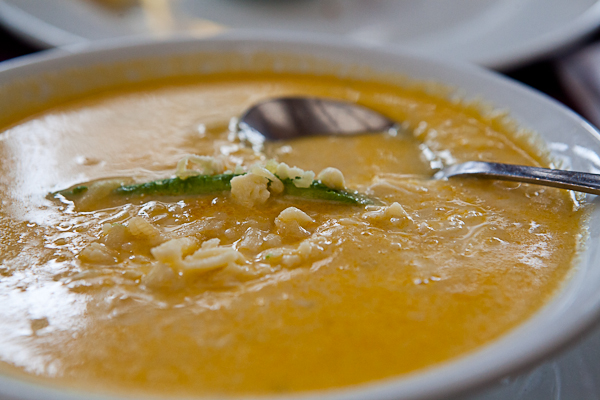 We kicked up our Ecuadoran culinary adventure several notches with a fine dining experience at Zazu, which we found on a list of worldwide top-rated restaurants. If you want to introduce someone – or your kids – to a tasting menu experience, do it here. 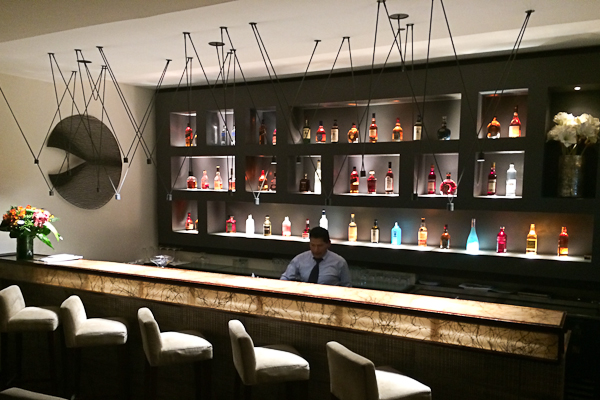 We started our night with a round of pisco sours in Zazu's bar.

No, it wasn’t our best-ever tasting menu, but it was unique and special. It also was on the less-expensive side compared to those you’ll find in the United States or most of Europe. A seven-course meal costs $60 per person. 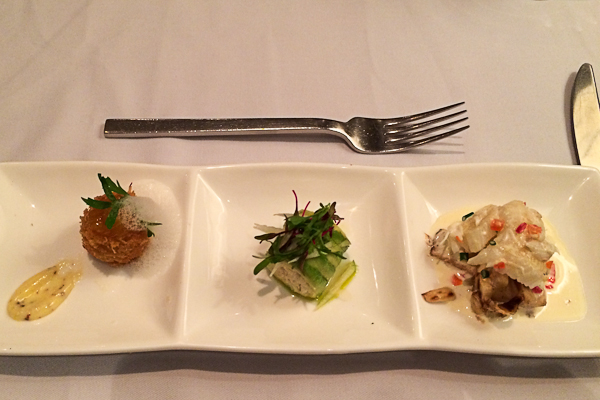 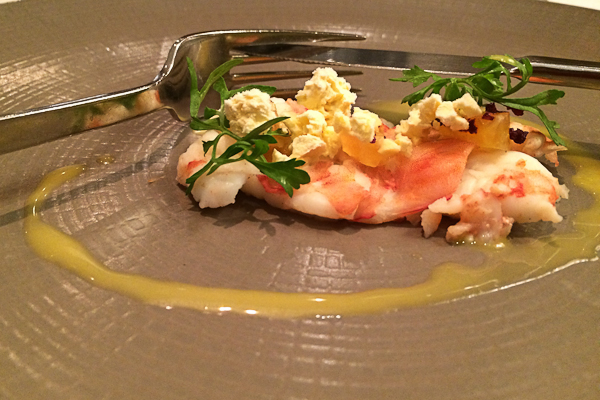 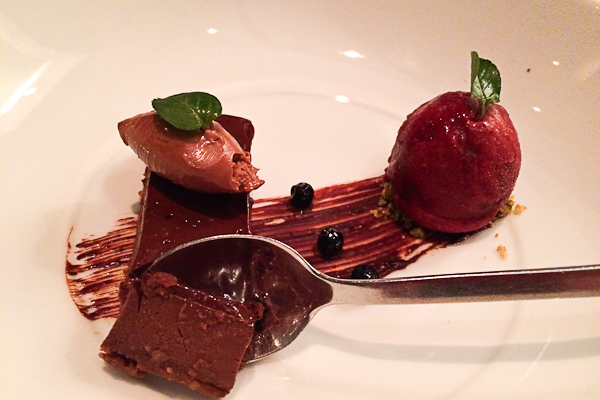 Anything ending with chocolate is a good thing.

There are plenty of sights and delicious food to sink your teeth into in Quito. If you’re in the area, carve out a few days to at least get a taste of it.

What are some of your favorite Quito sights and experiences?

0 # website 2015-10-13 23:20
Thanks for sharing your thoughts on Colonial Architecture.
Regards
Reply | Reply with quote | Quote | Report to administrator
Refresh comments list
RSS feed for comments to this post