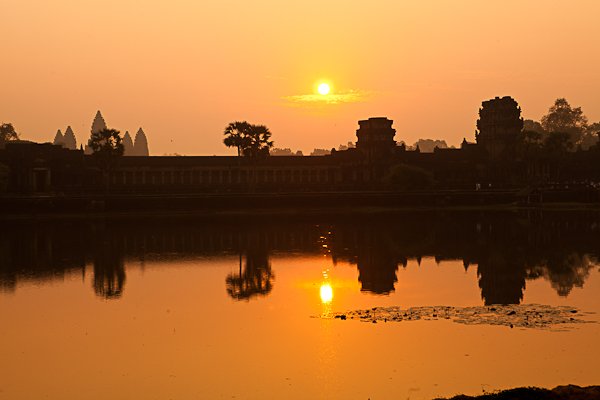 Southeast Asia has been on my travel wish list for years.

I’m no 20-something looking for price-conscious adventure. Admittedly, that’s how I envisioned the stereotypical tourist visiting Southeast Asia.

Instead, the region’s reputation for incredible food, enchanting temples and friendly people drew me here. Not to mention, every person who has visited the area raves about it.

Southeast Asia is what I’d call restrained exotic. It’s different enough to stimulate all of your senses, but sprinkles in plenty of smiles to make you feel comfortable.

We decided to cover Thailand with four nights in Bangkok and four nights in Chiang Rai, followed by three nights in Siem Reap, Cambodia, to get our Angkor temple fix. Compared to other travelers we met along the way, our time here was short.

Eleven nights gave us a decent introduction to this colorful region and left us wanting more. I see a return trip in our future.

Here’s a snapshot of our favorite moments from the trip.

Bond, James Bond. That’s what came to mind as we boarded our first and hopefully not last long-tail boat. Its high-pitch whistle added to the excitement as we built up speed and whizzed by the homes and business lining Bangkok’s canals. I lost all sense of direction as our driver navigated the maze of waterways. 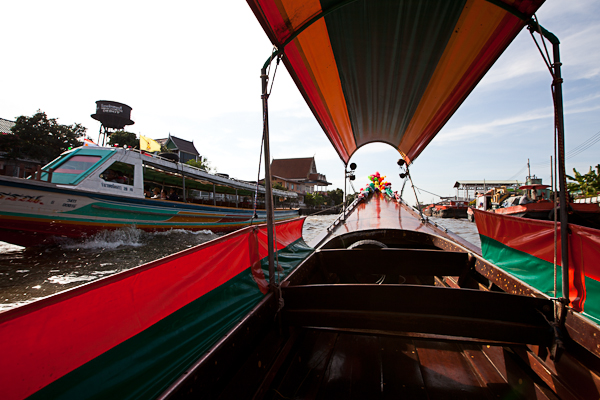 Home sweet home along a canal

Getting lost in the back streets of Thailand

After a few days of guided touring in Bangkok, we hit the streets on our own. We felt very comfortable navigating the streets around Chinatown, but be wary of the tuk-tuk offering to give you a lift to your hotel with a few tourist stops along the way.

After one stop to see the guidebook-forgotten “oldest temple,” we cut our losses and hailed a cab. Lesson learned.

Regardless, it was part of the experience and worth checking out the backstreets to get a deeper impression of everyday life around Bangkok.

At first, you find yourself scanning the place to try to take it all in. A closer look uncovers an elderly woman sleeping behind a food stall as a daughter works nearby, a man set up on a railway selling lottery tickets and a girl riding sidesaddle on a motorcycle taxi without touching the driver. It’s these little slices of life that reveal a much bigger picture of the culture. 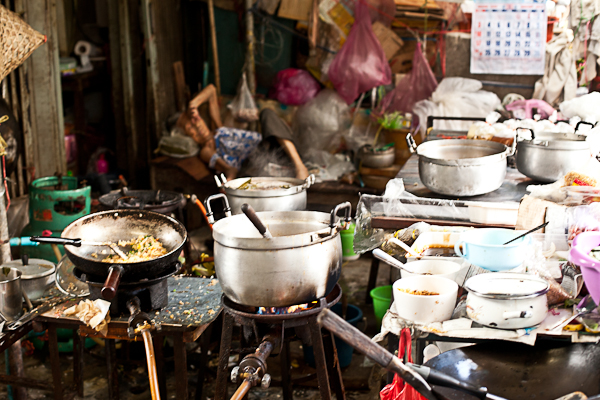 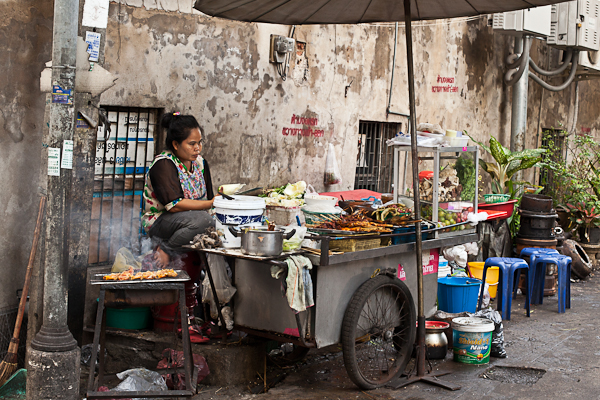 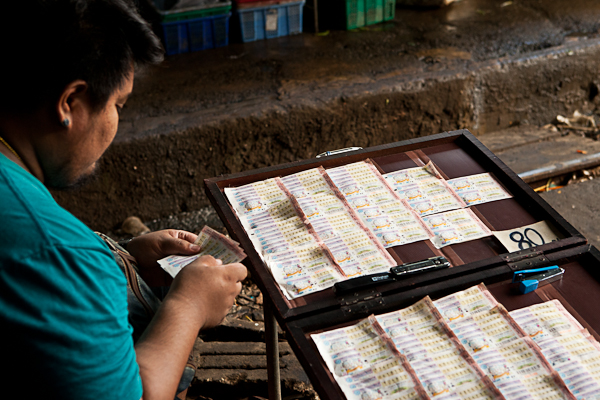 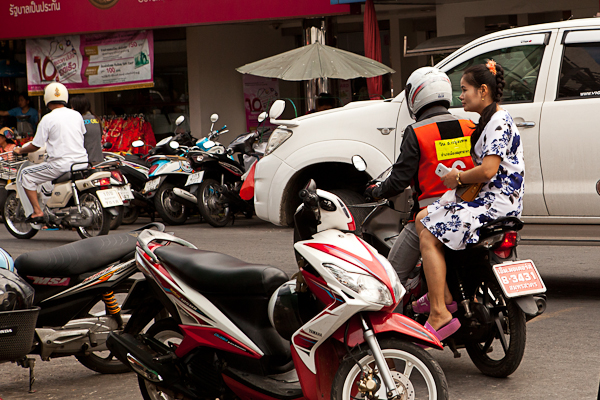 Seeing the bling of Thailand’s temples

Bling is everywhere in Thailand’s temples. As if the gold and bright colors aren’t enough to demonstrate Buddha’s illumination, flashing bright lights also do the job. Even in the shops selling grease-streaked auto parts, you’ll likely find a Buddhist shrine decked out with plenty of bling. 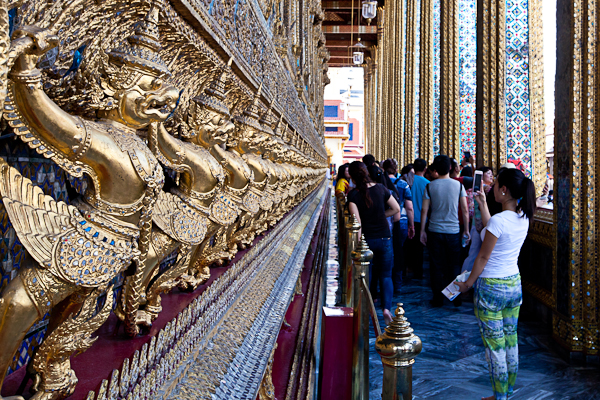 Outside Wat Phra Kaew, home of the Emerald Buddha 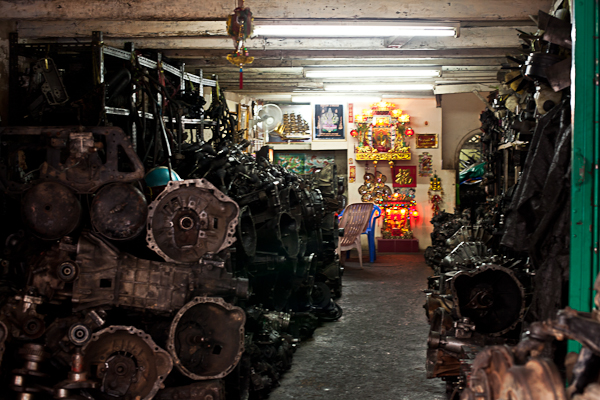 Bangkok at night is stunning. From 820 feet above at the Sky Bar, the city is dizzying and energizing. It’s not surprising that Sky Bar is ranked one of the world’s best rooftop bars. 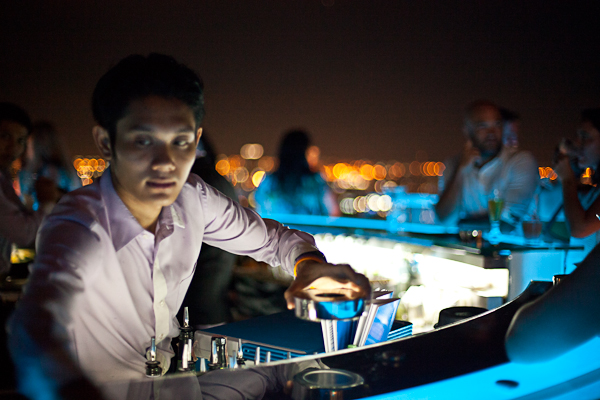 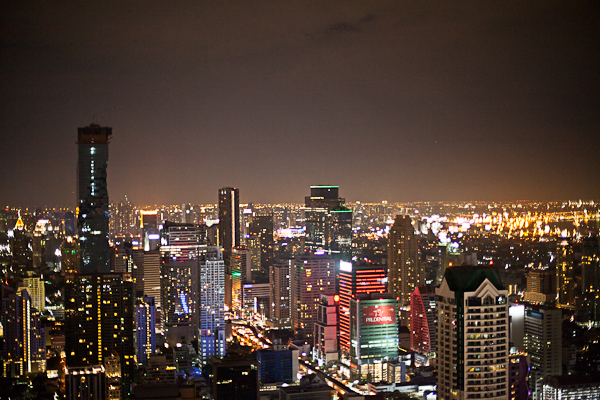 Visiting markets on the outskirts of Bangkok

Markets are one of my favorite things to visit in a city. We stepped out a little further to catch the sights and smells of Bangkok’s busiest fresh seafood market, Mahachai. Every type of fish – from alive to dried – could be found here. And a few frogs, dead or alive. 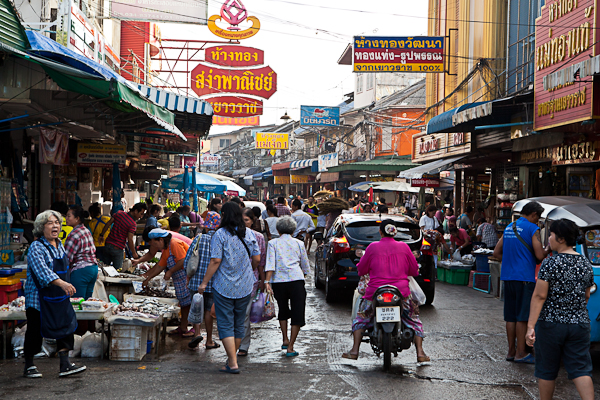 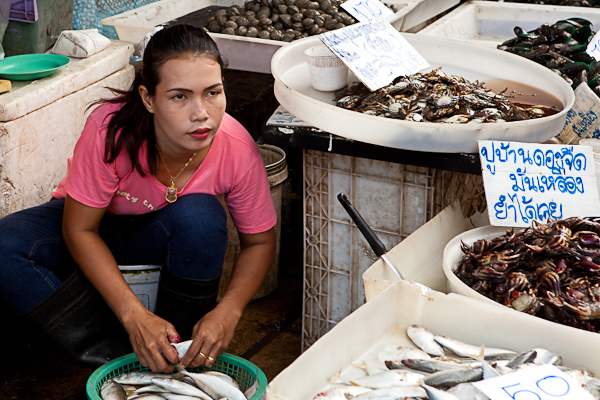 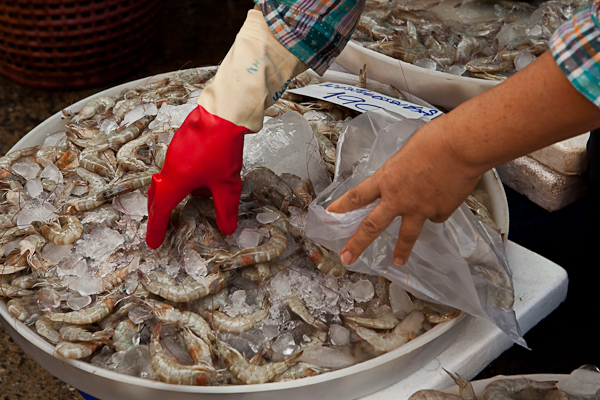 We found one section with a train track running through it. What about the approaching train? No problem. Just scoot your wares out of the way until it passes.

It’s not a trip to Bangkok without stopping to see a floating market. The Damneon Saduak floating market offered lots of opportunities for eating and shopping. 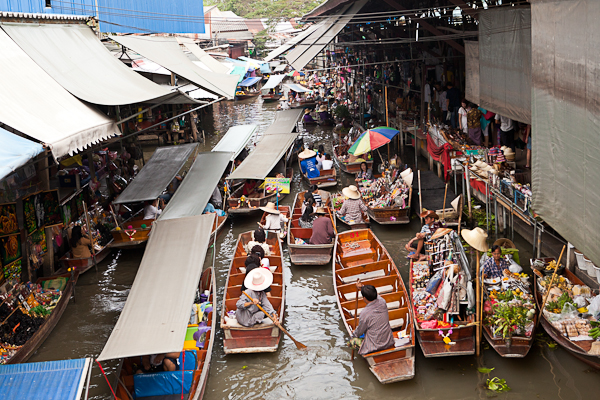 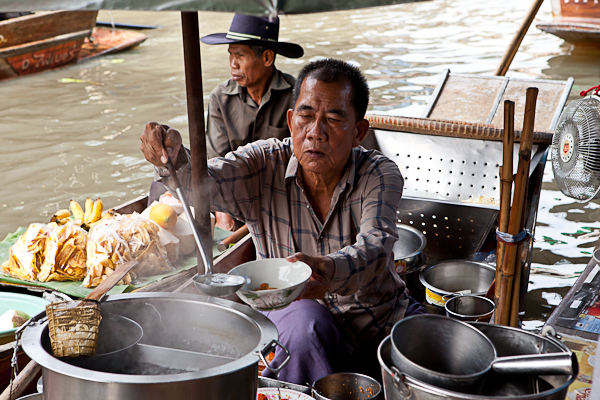 Other entertainment options included snake wrangling. Several snakes the size of a small child could be draped around your body like a stole. Maybe next time. 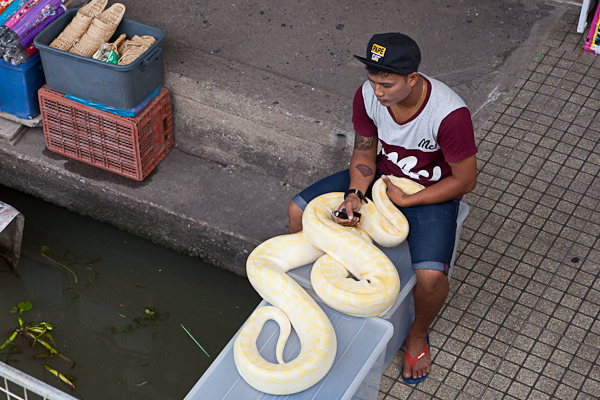 I had no idea how enjoyable a hot, steaming bowl of green coconut curry could be in the morning. What a treat – along with all of the new foods we tried during our trip. 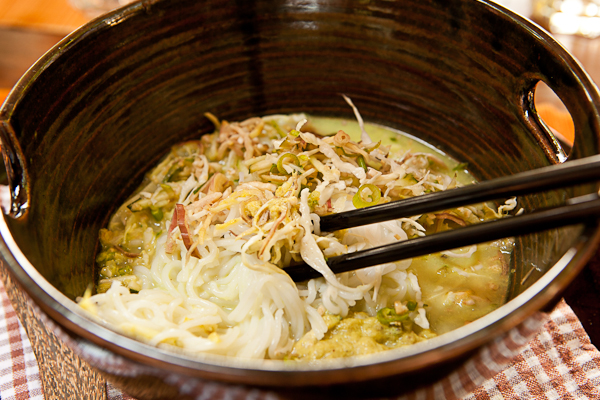 I especially enjoyed sampling the exotic-looking fruits. Hello, rambutan – the fruit with spikes that scream, “I dare you to try to eat me.” 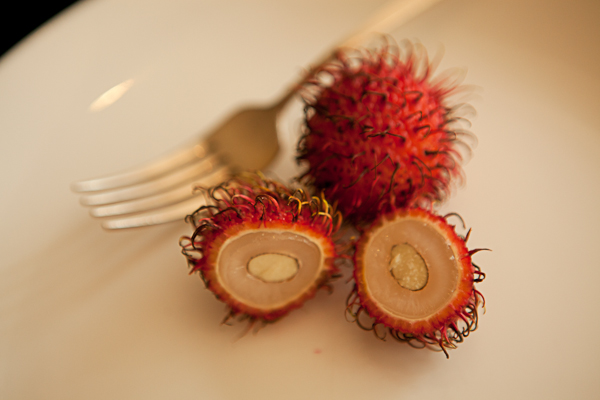 While I love my Americanized pad Thai dish, it does taste different here thanks to fresher ingredients. The atmosphere is probably the best flavor enhancer. 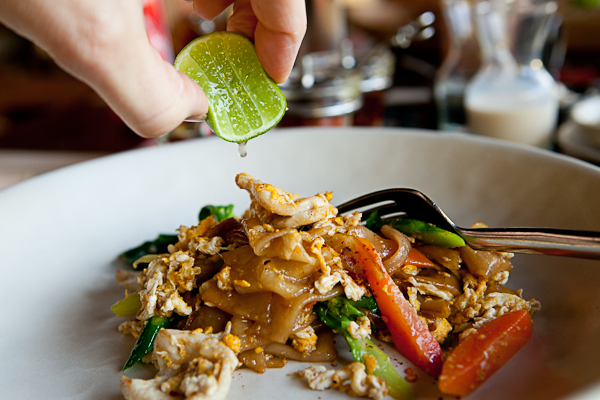 Getting to know Asian elephants

Our trip to Africa marked our first time to see elephants in the wild. They are majestic, gentle giants. I always thought Asian elephants were less attractive, but quickly changed my tune after getting to know a few at the Four Seasons Tented Camp Golden Triangle.

Every morning we fed elephants what seemed like an endless supply of bananas. They ate them peel and all. We also got to ride them without a saddle, with our legs draped around their necks. 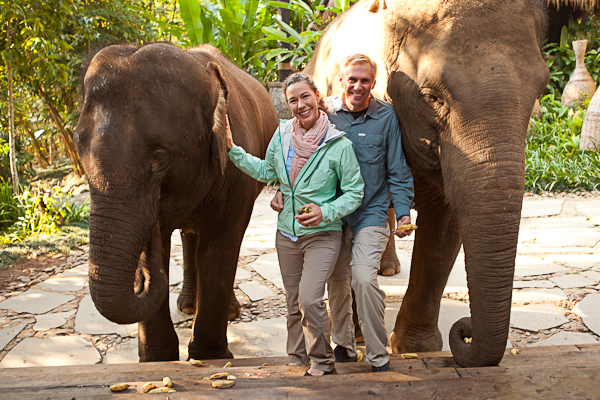 While I had mixed feeling about riding these beautiful creatures, I reasoned that surely their life dramatically improved after being rescued from a life on the streets of Thailand. Regardless of one’s view on riding elephants, it’s an unforgettable experience.

Guidebooks can’t prepare you for the grandeur of walking among Angkor's temples, especially during the golden hours around sunrise and sunset. Every temple is different and worth a visit. 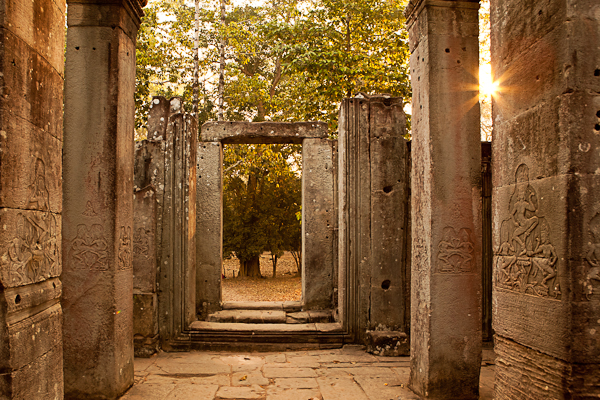 Our temple guide told us that after 11 years on the job, he still finds something amazing each time he tours them.

Finding interesting approaches, such as through a less traveled jungle path or before sunrise, are great ways to experience the temples before the mass our tourists descend upon them. 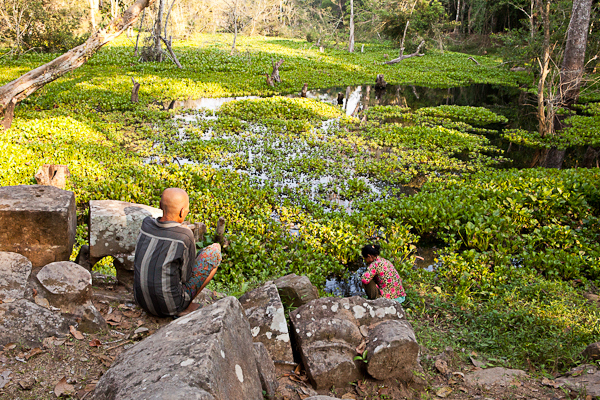 We ran across this family gathering fire wood as we approached one of the temples through a less traveled path in the jungle. 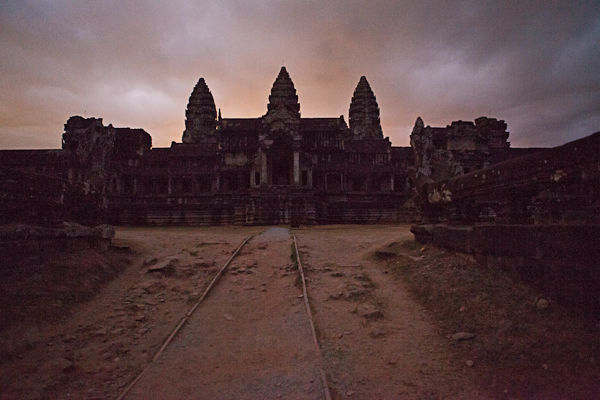 It was dark when we approached Angkor Wat at daybreak. It's one of the best ways to experience it before the crush of tourists.

Witnessing commerce along the streets of Siem Reap

Cambodian commerce is a spectacle to behold. Motorcycles, cars and remorks, which are canopied trailers hitched to a motorcycle, fill the roads.

Each vehicle is overburdened with people or massive loads of sellable wares. It’s not uncommon to see a family of four of five riding on a single motorcycle. 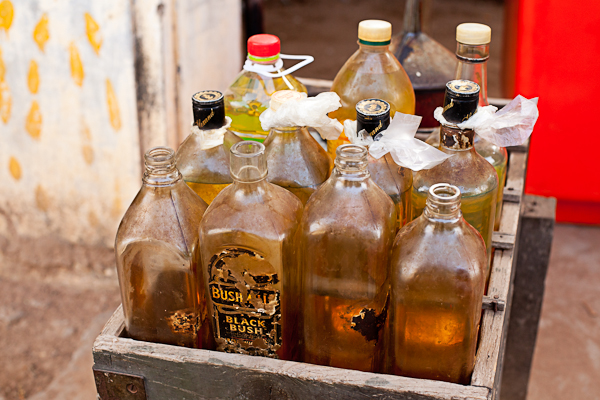 Don't drink this. Black-market gasoline sold in whiskey bottles are a common sight in Siem Reap.

Myanmar makes Thailand look like a thriving metropolis – at least in the border town of Takilek. We watched as a woman prepared a pouch of betel nut and a man doled out stacks of Myanmar’s currency of kyats from his open-air banking stall. It all feels very primitive and on the cusp of something bigger as this country carves out a new place in this world. 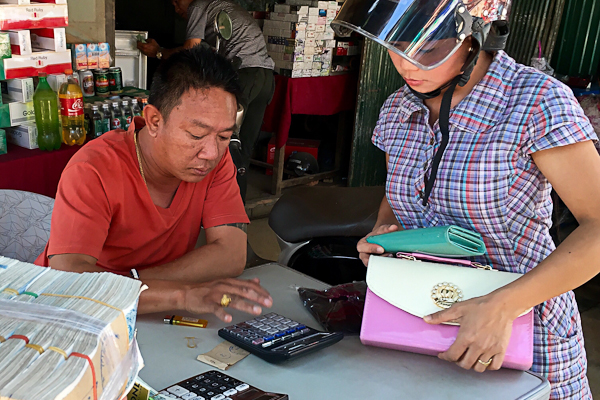 As you drive across the road, literally at the border crossing, you’ll also switch sides of the street. You’ll change lanes from left to right as you move from Thailand to Myanmar.

Experiencing (and losing count) at a Buddhist temple

It may be touristy, but visiting a Buddhist pagoda and making a wish is a fun experience – even when you’re counting challenged.

Burning incense, flowers, cups of waters on your designated birthday animal, chiming of a gong and the release of birds all make for a lot to remember when trying to fulfill a wish at a pagoda. Let’s just say I’ve earned a new name, “10-gong-Susie,” for my inability to properly count the number of times I needed to strike a bell when fulfilling my wish.

Fortunately, my guide quickly gave me an out by having me strike the bell an additional number of times (my age plus one minus the number of times I had already struck it). Ugh. I should have known my amends would involve a math calculation. 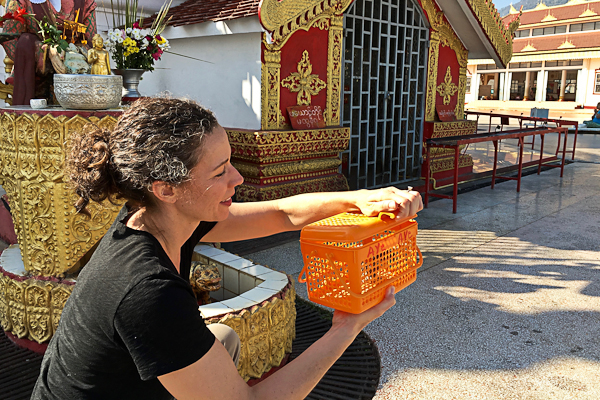 The bird release completes my wish at the Shwedago Pagoda in Takilek, Myanmar. The pagoda is a smaller replica of the famous golden pagoda in Rangoon.

Hands down, the best part of the trip came from each smiling face we met. I’ve never experienced a more accepting group when it came to photographing people. It seemed the more often I pulled out my camera, the bigger smile I received. 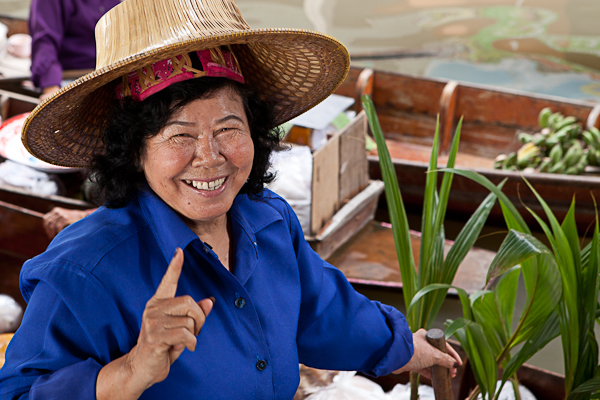 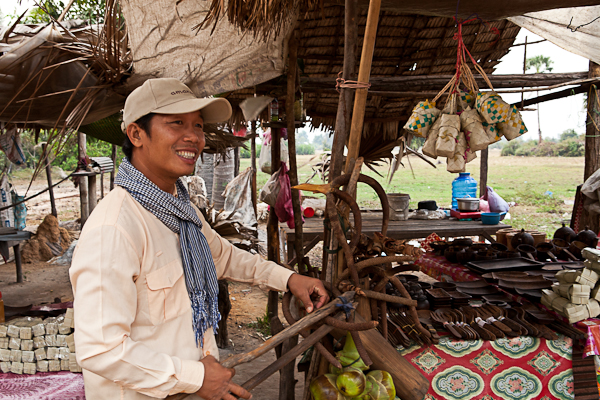 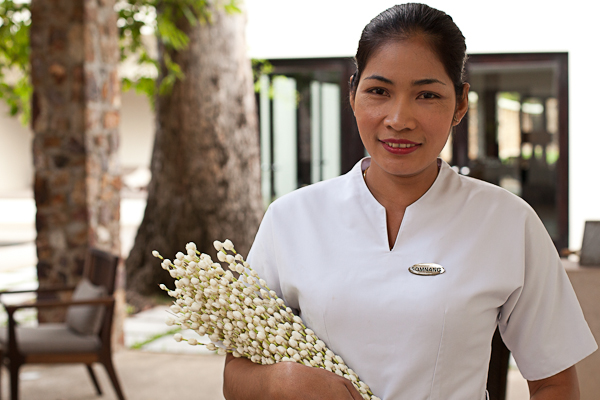 A woman refreshing flowers at our hotel, Amansara, in Siem Reap

Yes, the temples were beautiful and the food was delightful, but the smiling faces of the people are what will stick with us and bring us back to Southeast Asia someday. There are so many more countries to explore.