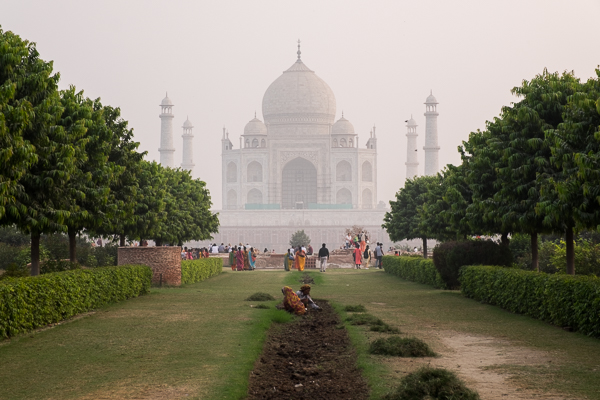 The Taj Mahal had been on my bucket list for years. Fog almost kept us from a sunrise pilgrimage to see this building at one of its best hours.

Our guide had told us the night before that we could “sleep in” the morning of our appointed sunrise visit because expected fog would make our early departure pointless.

Instead, we got an unexpected wake-up call around 4 that morning telling us our luck had changed. Get dressed and ready to head to the Taj, we were instructed.

Fortunately, our sleeping quarters at the Oberoi Amarvilas were just a golf cart ride away from the queue to get in to see the Taj. 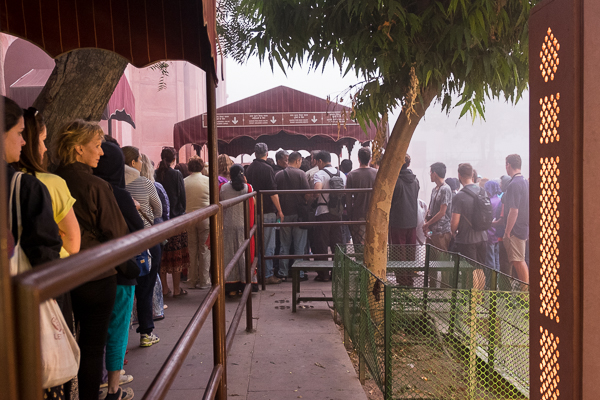 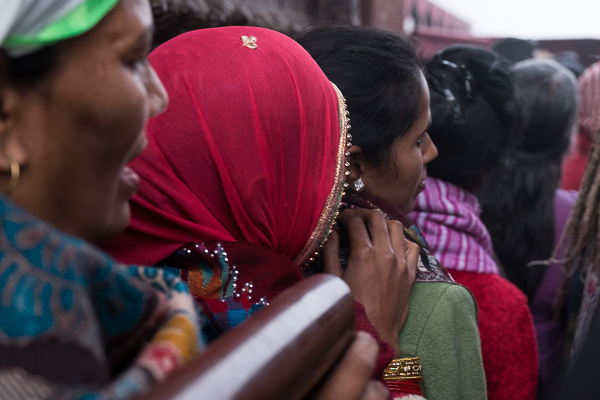 After passing through security and putting on our disposable booties, we walked through the lifting fog to see the massive marble building of my dreams.

The fog provided a dramatic and mystical way to see the Taj. It was as if nature drew an opaque curtain from the building, slowly revealing its grandeur. 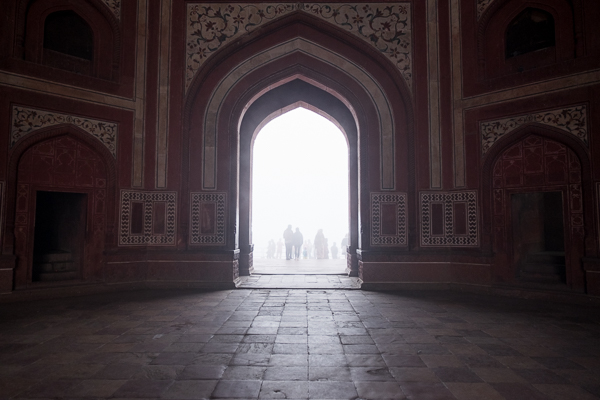 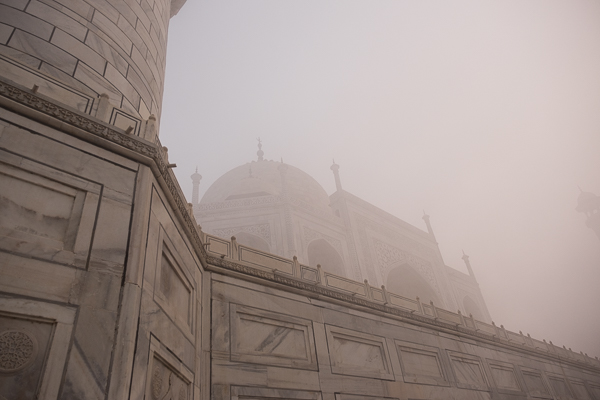 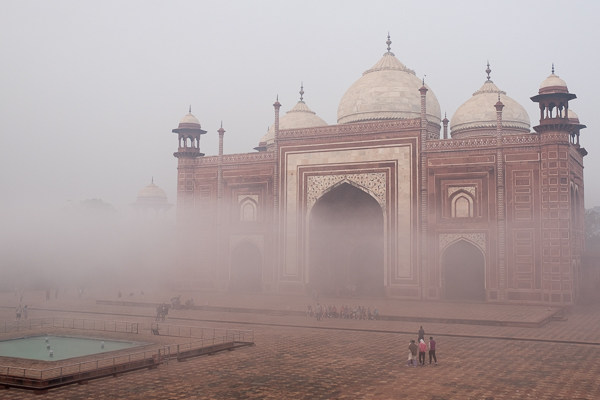 Fog around the red sandstone buildings surrounding the Taj Mahal 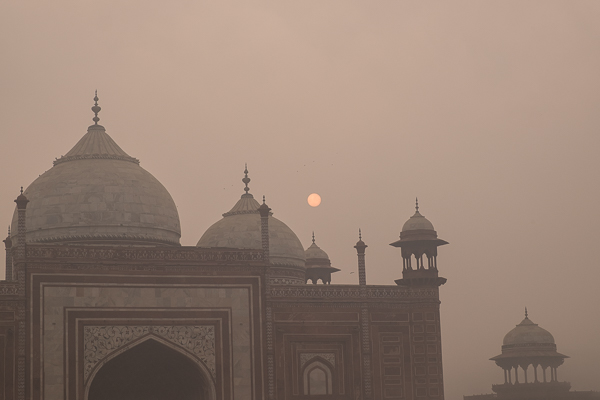 Sunrise is the magical (and busy) time to see the Taj Mahal complex.

As you walk its perimeter, the sheer mass overwhelms. It’s one thing to stand at the foot of a steep mountain shooting directly into the air and realize it’s something millions of years in the making through natural forces. It's another to stand in front of the Taj Mahal and contemplate the meticulous skill and labor required to construct this mammoth manmade building of love. 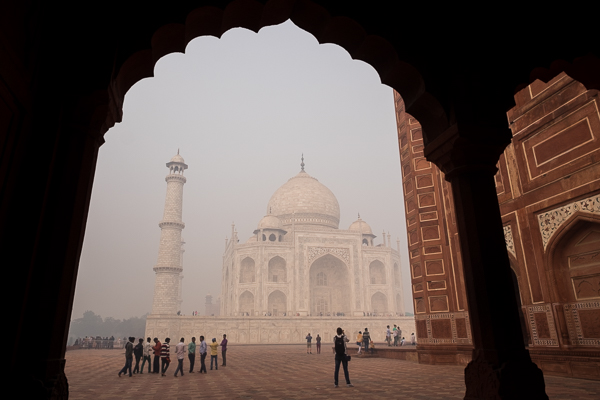 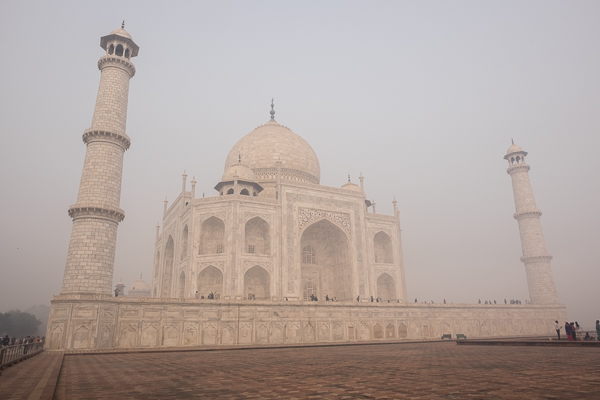 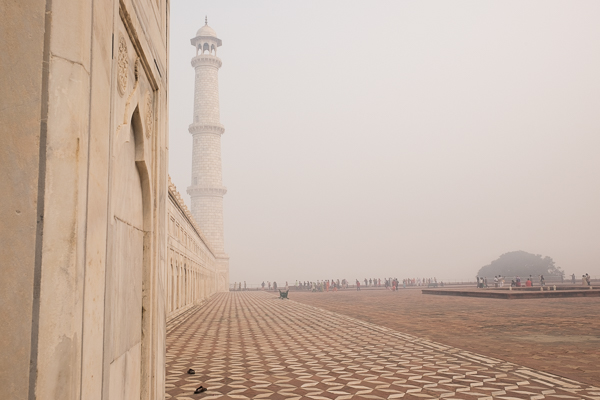 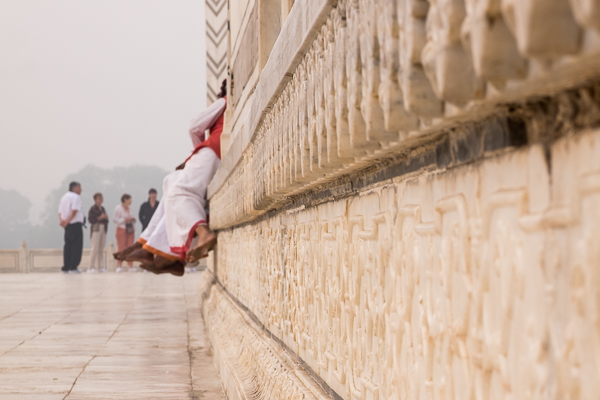 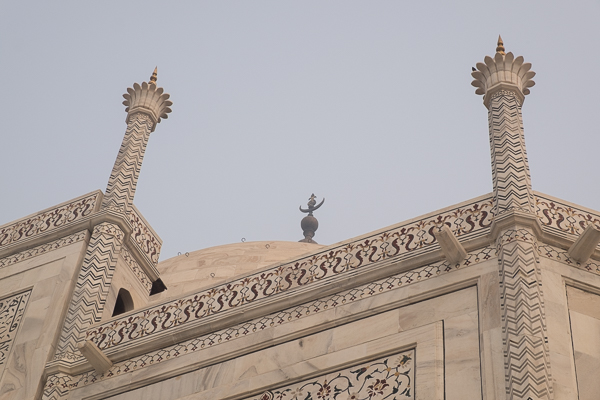 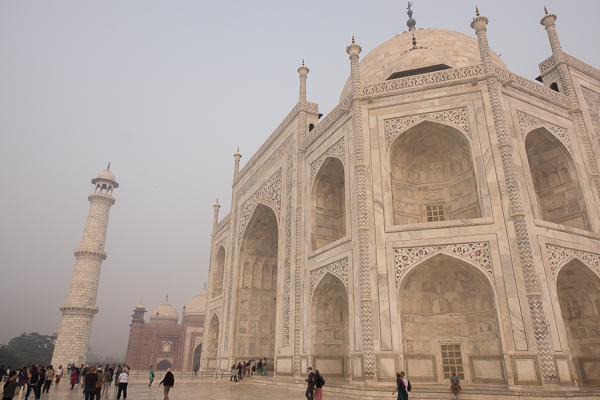 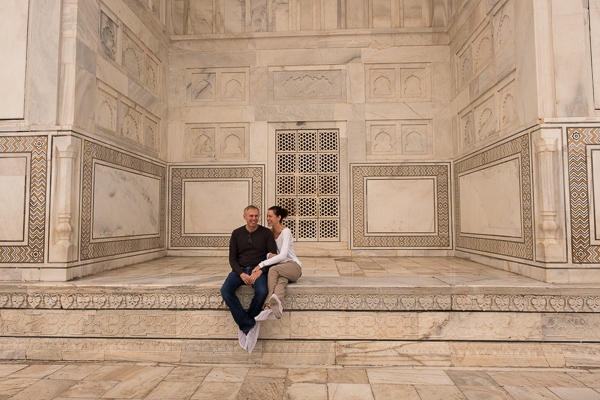 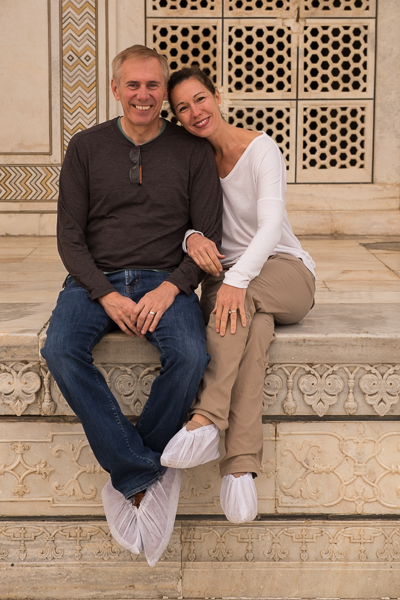 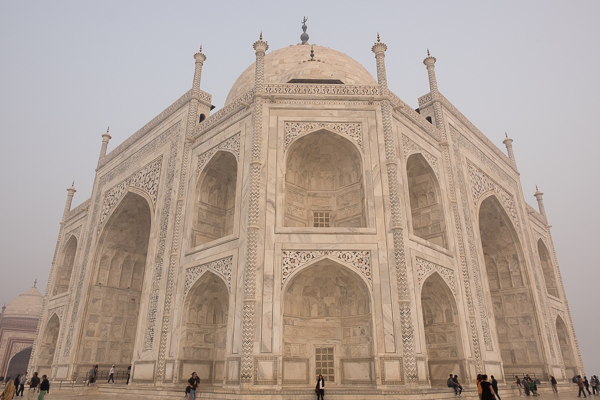 Some 20,000 laborers toiled for 22 years to bring this mausoleum complex to life. Emperor Shah Jahan built the structure as a tribute to his favorite wife, Mumtaz Mahal, who died during childbirth.

Built between 1631 to 1653, the main parts of the complex include the main gateway, gardens with a reflecting pool, mosque, jawab (a mirror building to the mosque and the “answer” to ensuring architectural symmetry), and 20-story-high mausoleum surrounded by four minarets.

While the mausoleum is the crown jewel, the other elements deserve ample attention. The main gateway leads beautifully to the white core flanked by the red sandstone mosque and jawab to further accentuate its ghostly appearance. 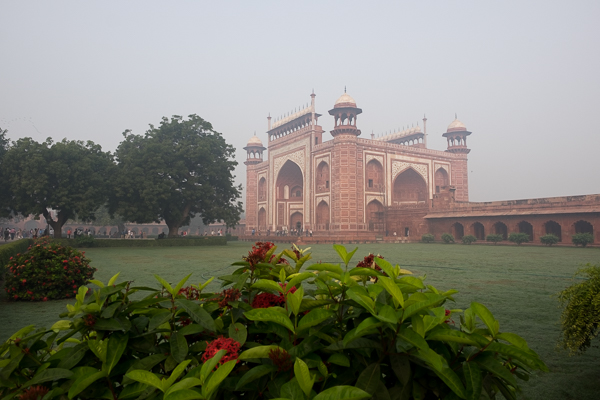 The main gateway leading to the Taj Mahal 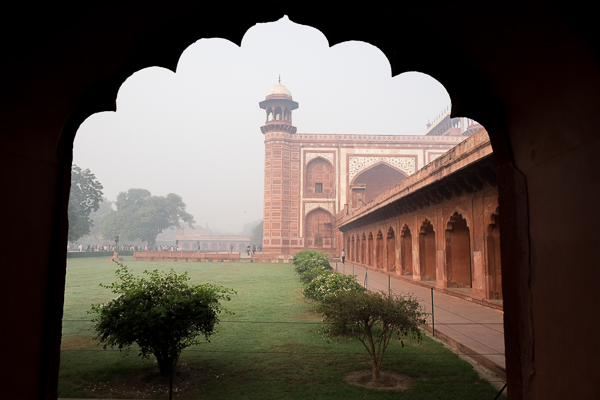 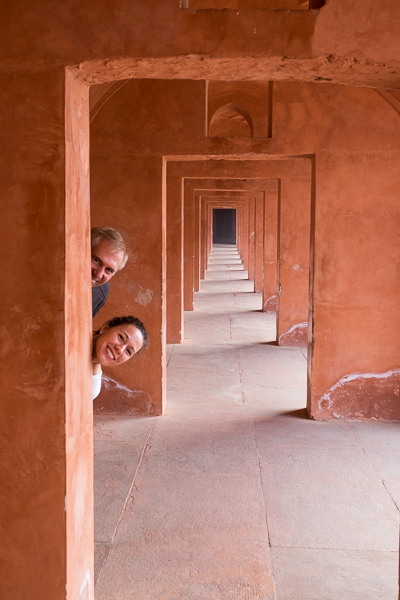 One of the halls leading off the main gateway 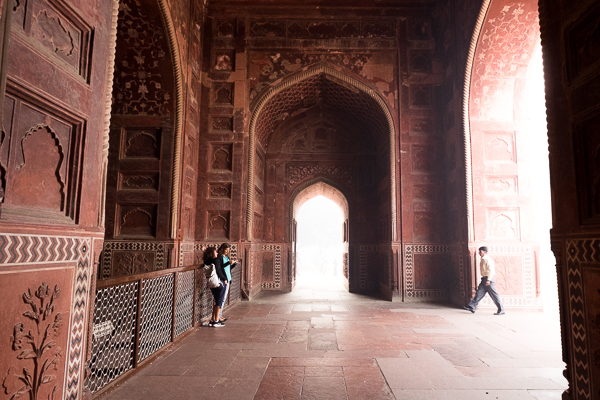 The jawab, one of the red sandstone buildings flanking the Taj Mahal 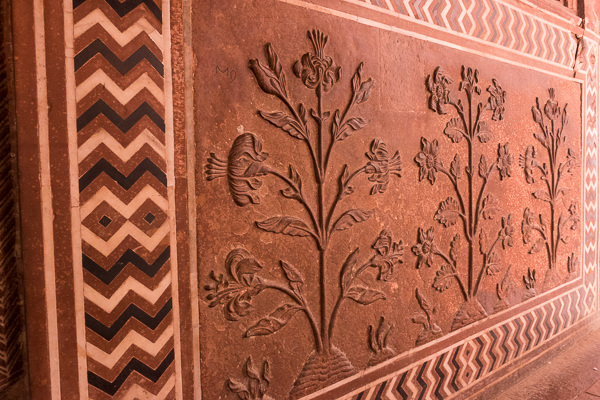 Spectacular detail in every corner of the complex

While the scale of the massive white Makrana marble structure is commanding, the artistic detail of the inlaid semiprecious jewels is stunning. Geometric and floral patterns in blue, green, red and yellow stones liberally adorn the structure, begging passersby for a closer look. 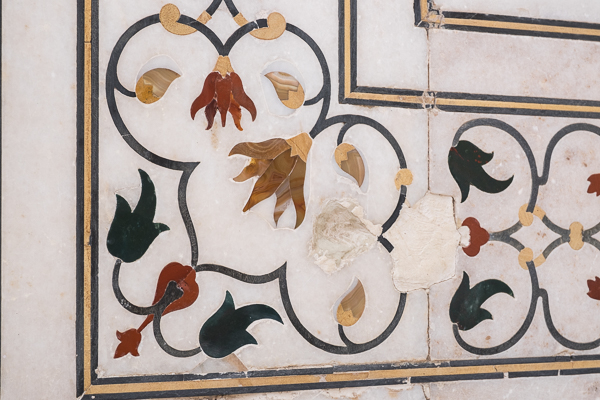 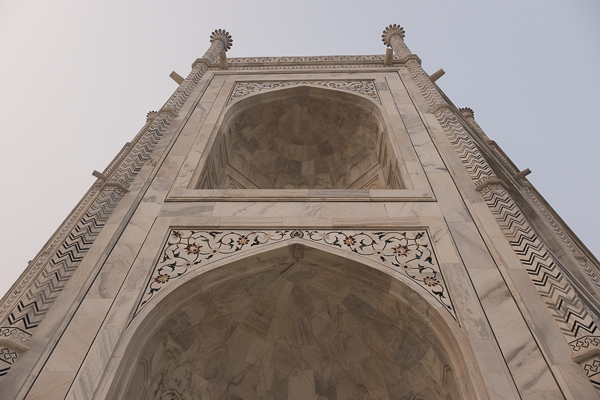 A few hours doesn’t feel like enough time to fully take in the Taj Mahal. The relatively quick and monitored path through the dimly lit interior to see the tombs of the emperor and his wife left me wanting more. 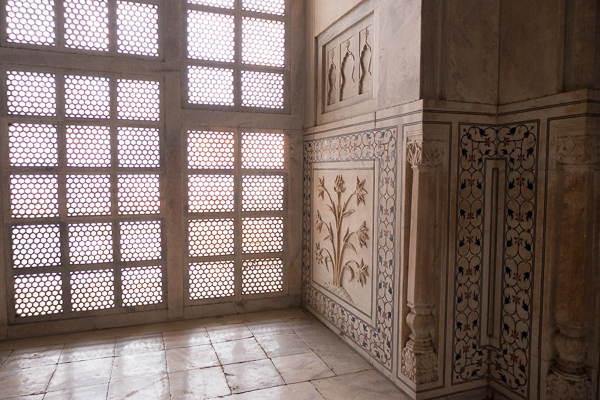 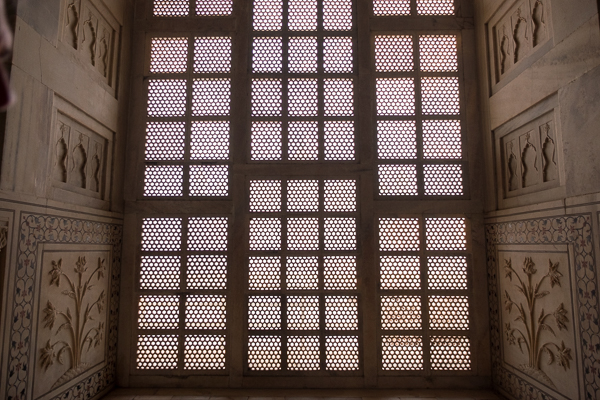 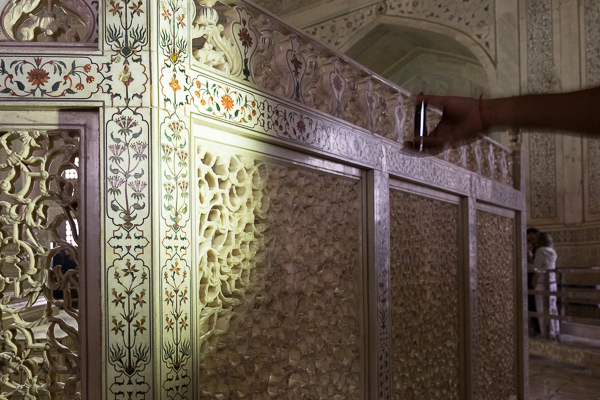 A detailed screen surrounding the tombs 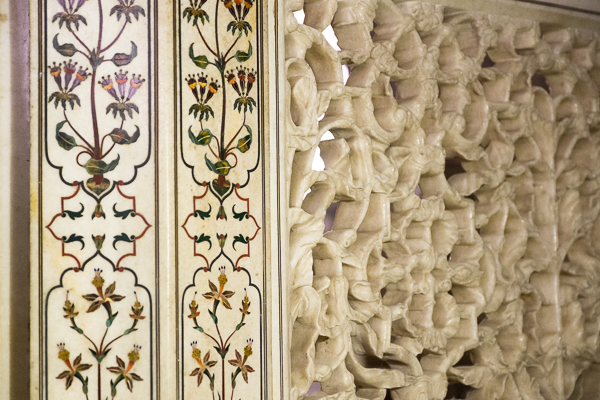 I’m not sure if I’ll ever make it back to the Taj. If I do, I know it will be equally enthralling and different.

Who knows what nature’s backdrop will have in store for us? Blue skies, filled reflecting pools or the sun’s changing rays spotlighting sections of its magnificent locally quarried white marble.

Regardless, its architectural mastery and beauty will shine.